And So This Is Christmas ...

And what have I done?  Well, for one thing, I didn't mean to be so long between posts!  But the past 10 days or so have been crazy, both at work and at home, and even though I wanted to post, I was generally too tired by the time I would sit down and even check e-mail.

Not that I wasn't ready for Christmas, just that so many things were going on all at the same time, I barely knew for sure when I'd completed one thing and could move on ... but things are quieter now, and so here I am.

A week ago Friday, we got our Christmas tree.  Jetsam loves the Christmas tree - good for sniffing, getting a head rub from the needles, ambushing the unsuspecting - but Pip was really concerned for a few days.  For one thing, every time he would go to sniff it, he'd get poked in the nose by a pine needle - the nerve!  Then, The Tim put lights on it, and it kept flashing, which the Pipster just was not prepared to see!  The shiny glass bulbs and the garland are interesting though ... I guess we'll see what happens once all of the ornaments are on it.

There has been excitement though - since most of our family and friends are out of town, we have been packing boxes to send, and well, you know how hilarious boxes can be!  A lot of leaping in and out, jumping out unexpectedly at each other, and attacking wrapping paper.  One day last weekend, they had a huge "fight" inside of a box, so I dumped them out, but the tussle continued: 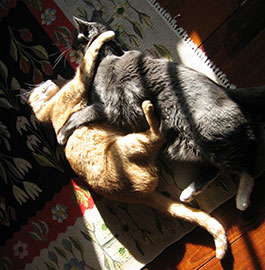 As usual, neither was really the "winner," but I'm sure they were both pretty pleased with themselves and their fierce abilities.  They are truly like little kids who get overexcited with all of the things going on at Christmastime, and when they are not driving us crazy, we get a real charge out of them.

The weather has been annoying, and by that I mean too warm to suit me, but the past few days have felt nice and wintery, so maybe there's hope!  I finished knitting the gifts I wanted to send, but on the chance that any of the recipients happens to drop in here before they open them, I'm gonna wait until later to show you pictures.  I still have something in mind for The Tim, but with an entire week to go, I'm not worried about finishing it.  Trust me, it's not something like a sweater, so I know it's do-able.

Yesterday, cookies were made.  The Tim had made pizzelles and some almond biscotti last weekend, and yesterday he made brown-sugar-ginger cookies, and I made a batch of seven-layer-cookies.  We'll probably make one or two more batches before we call it finished for this year.

I cannot believe that Christmas Day is a week from today - we've had a fun Christmastime so far, and I can't see that the next few weeks will be any different, so I'm a happy camper.

OK, that's it for now.  Next time, I want to show you one of our new decorations, and tell you why it's extra special.  Until then, enjoy!
Posted by Bridget at 10:46 AM

Corey feels that all our cat-safe ornaments should not feel safe from him, so he has beheaded an angel and chewed any number of beads off their wreaths. I see him eyeing the breakables higher up, so keep your fingers crossed for the more delicate baubles on our tree!

I love the way cats act at Christmas. One year, when Lila and Dashiell were just kittens, my husband and I would unwrap our gifts and then just toss the paper onto the floor. It was the perfect cat toy. By the time we had finished opening gifts, the paper was all over the living room floor, and we had a big living room! It was like a carpet of paper.

You've made quite a bit of progress in your Christmas prep. I hope yours is quite merry!

The kitties look like they are hugging not fighting :) Your cookies sound wonderful. This is the first year where I've simply been too busy to notice or prepare for Christmas. But I have gotten done what needed to be done and I will enjoy my parent's Christmas decorations! Hope you have a wonderful holiday celebration :)

The bottom half of our tree is ornament-free thanks to George and Henry's abiding interest in anything shiny and dangling. Luckily, they haven't knocked it over (yet), but they do like to drink from the tree stand, which makes me crazy :)

Sounds like your holidays are pretty happy, aside from the too-warm weather. It's pretty chilly now here in NYC, so hopefully better for you, too.

Bridget- I always think the guy on the bottom has the advantage. They can perform the rabbit kick maneuver- but you're right, it's hard to tell.

And.. where is the snow?