So, I Have Actually Been Knitting ...

It's true, I've been knitting away on some things for Christmas gifts.  I finally have some of them photographed, so it's time to share!

After Doughboy died, I decided that I definitely wanted to knit something special for Ben this Christmas.  He and Doughboy were so dedicated to each other for so long, I knew how sad he was that Doughboy was gone.  And with his work, and Halden and James, I knew he didn't get a lot of time to himself.  It came to me one afternoon at Rosie's - I was going to knit him a scarf that would be like a cuddle with Doughboy! And then I could knit something else for Halden and James too, especially since they have moved to Colorado, where knitted things are not just appreciated, but necessary.

So, first up was the Doughboy Scarf.  I chose some soft, squooshy, black yarn, and decided to go with the basic Seafarers' Scarf pattern, but add a pawprint pattern at each end of the scarf.  I found one (unfortunately, I forgot to note where), and when I got the scarf started, asked The Tim if it would be something he'd wear, and not too girly.  He said he thought it looked great, and would be something a guy would wear.  And so the knitting began in earnest!

I am thrilled with the result: 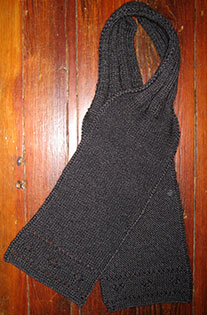 Of course since it's black, it's nearly impossible to see the little pawprint; I tried to get a closeup, but it's not a lot better: 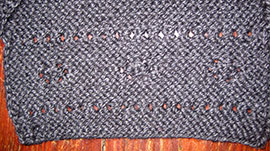 Anyway, I am happy with how it turned out, and hope that Ben will like it, and that he will think of happy times with Doughboy, as well as a cuddle from him,  whenever he wears it.

Pattern:  Seafarers' Scarf
Yarn:  Fibre Company Canopy Worsted, slightly less than 4 skeins
Color:  Obsidian
Needles:  Size 5US
Modifications:  Adding the pawprint pattern at each end of the scarf.  I'm going to poke around and see I can find it again, and will add it to my Ravelry link if/when I do.

The yarn was great to knit with -soft, with a nice halo and not splitty at all.  Some color would come off on my hands, but not a lot, and a vinegar bath will hopefully set the color so it doesn't come off on Ben's neck!  I loved knitting this scarf, because it made me feel like Doughboy was nearby.

That is a wonderful scarf! Since you mentioned Doughboy, my friend Monica sent me a link to a project on Ravelry that was knit with spun Newfoundland and Great Pyrenees fur.

Bridget- What a great idea. I'm sure he'll love that.

Sniff, sniff, wipe, wipe... That made me mist up a bit. What a fabulous gift. And that reminds me... I need to knit faster on my sister's simple scarf (due Sunday for her birthday) so I can start on the paw print scarf for a friend who also lost her fur-baby...

Awww. I love the scarf and you for thinking of it and knitting it.

What a lovely tribute!

Aww, what a great gift!

love the scarf, b!