In the last installment, I showed you the Doughboy Scarf I knit to give to Ben this year for Christmas.  Well, there was no way I was not going to knit something for Halden and James as well!  I hoped that they would like it and wear it when received, and that it would be special because I knit it with them in mind, but that part is not anything I can control.  So I proceeded, because it's what I really, really wanted to do.

Halden's last name before she got married (and James' middle name) is FitzGerald.  In my regular perusals of the Three Irish Girls site, I'd seen a really lovely colorway with that name, and had always wanted to make something for Halden out of it.

So what happened when I went to order some?  It had been discontinued!  I sent a note, asking about it, and they were nice enough to send me a note suggesting a source that might still have some - SCORE!

Next I had to choose a pattern.  I wanted a cowl, and actually had one in mind, but I tried to use the pattern, and it just didn't work.  So I decided to try a free pattern from Madeline Tosh, called Honey Cowl.  It was fun to knit, but I wasn't really sure how it looked - meaning, did it look nice in the yarn?  After several people assured me quite emphatically that it did in fact look great, I continued.  Pretty quickly, it was done and ready to photograph. 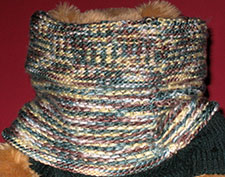 (modeled by Barnsie the Bear, with the top turned over like a cuff)

Project:  Halden's FitzGerald
Pattern: Honey Cowl (short version)
Yarn:  Wexford Merino Silk, in the FitzGerald colorway, from Three Irish Girls
Needles:  Size 8US
Modifications: None.  I couldn't afford enough yarn to make the longer version of the pattern, but the small size was just right.  The yarn could not be nicer - soft, cushy, with a teeny bit of shine to it.  It made knitting the pattern extra enjoyable.  It was my first experience with Three Irish Girls, and I can't say enough nice things about them!

For James, I decided to go with a tried-and-true pattern, my Zach Attack Hat.  I have no idea if James is a football fan, but I know that Ben is, and that little boys often like to be like their fathers.  Since Ben's favorite team is the Denver Broncos, and they now live in Denver, I decided to use the Broncos' team colors, orange and bright blue.  I love the result, and hope he will too! 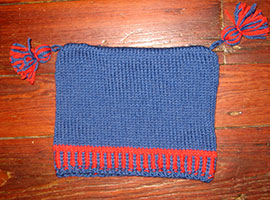 Project:  A Broncos Hat for James
Pattern:  Zach Attack Hat
Yarn:  Nashua Creative Focus Worsted, in Blue and Orange (I lost the ball bands, so cannot give you colorway numbers, sorry!)
Needles:  Size 7US
Modifications:  I decided to try corrugated ribbing, and I really like the way it turned out!  I also knit two additional rows of the orange before switching to the blue yarn.

Here's another picture for you: 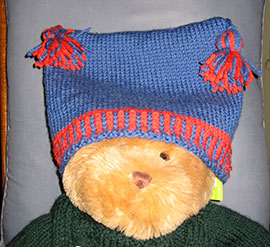 In the end, I'm happy with all three knits, and hope that they will keep the entire family feeling warm and loved.  Now all I need is their new address, so I can put them in the mail!
Posted by Bridget at 7:11 PM