In the morning hours between 10:30 and 11:45 on Monday, October 8, 2012, a homeowner who had been out running errands found that a food crime had occurred during her absence.

At the time of her departure, there was approximately 3/4 of a loaf of home-baked pumpkin bread that had been baked the Saturday prior, on a plate with plastic wrap covering it on a table.  Upon return, she saw clear evidence that something untoward had occurred. 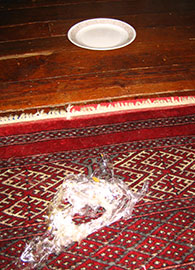 Exhibit A: a torn piece of plastic wrap, and a licked-clean plate on the floor below the table where the aforementioned pumpkin bread had last been seen. 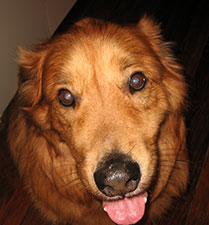 The Primary Suspect:  Dug, aka "The Doodle Dog" 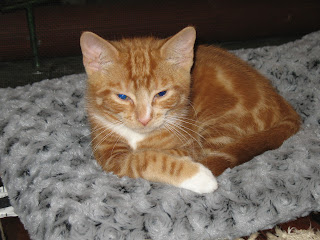 The Snitch:  Milo, aka "The Koodle"

When the homeowner walked in, "The Koodle" seemed particularly excited to see her, and happily led her into the next room, where he proceeded to prance over to show her Exhibit A.

At that time, the homeowner searched the room for suspects, knowing from prior experience that The Snitch did not like pumpkin bread.  On the other side of the room, looking quite guilty sat The Primary Suspect, with his head down.  Upon approach, he continued to look shamefaced and started to slowly wag his tail.  When he raised his head, there was an overwhelming scent of pumpkin breath.

Upon questioning, The Primary Suspect broke down somewhat and pleaded no contest, thereby saving the Commonwealth and its taxpayers both time and money.

The Primary Suspect was given probation, as it was his first offense, and he has not before even faced accusation.  He departed from the court, and retreated to his crate for a nap before reappearing and making every attempt to act as if nothing had happened.

The Snitch retreated to the basement, where he was last seen chasing pill bugs.

I love it. The accused is lucky he had a such a benevolent judge. The snitch... well, I have a snitch in my house too, and they're actually pretty cute...

You forgot one thing:

Carol - I can't believe that I forgot that!

hysterical....my dear dog Huck a golden, loved pumpkin. I put it in his food. he loved love d loved it. so we must let the suspect go free....
it is just a golden thing

thank you so much for a great laugh, how could that sweet face be guilty of anything? I think it was a set up.
Meredith

How could that face be guilty?

My Tim loves baked goods; he'll eat through plastic so we have to be super careful.

Are you sure it wasn't entrapment?? After all the pumpkin bread was left on the table unsupervised. MUCH temptation for The Primary Suspect to avoid. I think there is more to the case and he needs to appeal to get it expunged from his record.

I would suspect the husband. But I'm just like that. And I only have cats, but they are so odd that I wouldn't put it past them to eat pumpkin bread.

Funny! I had the L&O theme bit in my head too when I read that! Have you seen the Denver guilty dog video on youtube? Poor Dug reminds me of that.
http://www.youtube.com/watch?v=B8ISzf2pryI