The Story of a Pumpkin Hat

If you have been a reader of my blog for a while, you probably remember my dilemma over what/if to knit something for my newest great-nephew.  His parents are not ones to care about handmade things, so the pressure was only my pressure on myself.  But you see, up to this point, I've made all of my great- nieces and nephews hats when they were born.

Also, they live in San Francisco, so he didn't really need something warm.  At first, I was going to make him an elephant pillow from some fabric I had.  Then I decided that no, I'd knit him a toy.  I thought I would knit Elefante, by Susan B. Anderson.  Checked the pattern, decided that a) it was kinda fiddly, and b) it had some crochet, which I do not know how to do.  Moved on to a Baby Bobbi Bear, and got it all knitted.  Then I went to stuff it, and instead of looking like a cute teddy, it looked like a mangled teddy who was put back together by a blind person.  By this time, it was fall.  Parker was born in May.

So, I had a brilliant idea - I'd knit him a pumpkin hat!  YES!  The pattern is one I've done several times, and I knew it was doable in a short amount of time.  Away I went, knitting it up quite quickly.  I figured I'd be able to mail it on Saturday (yesterday).  Then my sister sent me this picture. 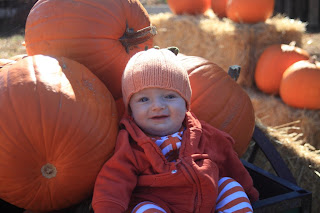 Sigh.  Let's face it, a baby doesn't need two pumpkin hats.  So, new plan.  The nearly completed pumpkin hat that I was making, would be for Doughboy's newest little brother, Paul.  Since I was using Encore, it would be nice and warm for his little baby head in Colorado, where they now live.  And Parker ... well ... I think I will make him the elephant pillow (sewing) that I had originally thought about making.  But, since we are going away at the end of the week, I probably won't even start it until we get back.  Such is life.

On the plus side, it meant that now I had a baby gift done!  This yarn 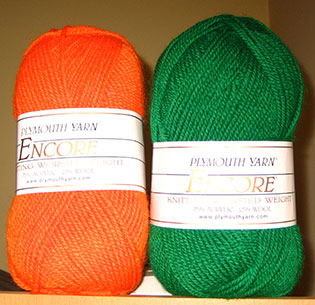 had become this hat 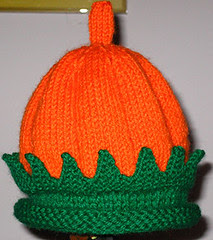 and it did get sent out to its recipient yesterday.   So all's well that ends well, I guess.  But I am wondering if just buying Parker a gift would have made more sense ...

Pattern:  Patrick's Pumpkin Hat (I made the largest size, so it can be used for a couple of years)
Yarn:  Encore Worsted - pattern used roughly .08 ounces of the green yarn, and about a third of a ball of the orange
Needles:  Sizes, 5, 6, and 8US
Modifications:  None, except for the recipient!
Comments:  This is one of my favorite baby hat patterns, and it really is not that difficult.  I managed to make this one in four evenings of watching TV after dinner, and for me, that's pretty amazing.

******
As I mentioned, we are going away later this week, so we'll see how much of anything else I can accomplish ... that's it for now!
Posted by Bridget at 7:10 PM
Labels: 2012-knitting, babies, fos, knit-fails, knitted-gifts

I knit a baby bobbi bear for one of my coworkers and after I washed it, it looked disturbingly like it had 6-pack abs.

Bridget- I love it. I have made several of them, and the raspberry too. I thought the pineapple was going a bit far.

I think you were wise to make the largest size~!