A friend of mine has stated on more than one occasion how she enjoys the "cross-pollination" of friendship on Facebook.  And regardless what you think about that particular social media, I happen to agree with her.

Though I was hesitant to join, when I did, I ended up enjoying "talking" with people I don't get to see enough, and since I hate talking on the phone, it was a way to touch base, even if we didn't say anything IMPORTANT.  One of the things I really enjoy is the live commentary by my nieces whenever an awards show is on TV - they give The Fug Girls a run for their money then, and it is truly hilarious!

And, as implied by the title of the post and the first paragraph, you end up "meeting" people through your other friends.  Someone makes a comment on a friend's update, or expresses an opinion that you agree with, or think is funny, etc., and often it turns out you become Friends on Facebook.   It's weird, but also fun.

One of the people I met through my friend Carol is a woman named Kristi who lives in Massachusetts.  Kristi sounded like she was a lot of fun, but also truly thoughtful and caring.  She is dealing with her spouse's Alzheimer's, but does not let it define her.  The really cool thing was getting to meet her in person last year, when she visited Philadelphia for a weekend.  She was even better in real life.

Recently she took a trip to Iceland, which I think must be a trip that you'd never, ever forget.  From her pictures and descriptions it sounded wonderful.  When she returned, she sent me a message asking for my mailing address, since she wanted to send me "souvenirs."  I was expecting a postcard, or magnet - you know, the type of thing I would send someone.  And I really didn't care what it turned out to be, because a) someone was actually being nice enough to think of me, and b) it would come in the mail - a package!!

Then it arrived, and I could not believe the wonderful things that were inside - I felt really overwhelmed and excited.  And I am finally getting around to posting about it.  (And next, I need to write a proper thank-you note. Ahem.)

There was a keychain:

A mini-Icelandic sweater, with a little sheep charm! (Bad photography by yours truly, of course)

Aren't they the best?  I am especially amused by the giant cats next to the buildings.  And the middle one is from, er, here.  (She said she decided she would spare our mailman but just including it in the box!)  I can truly say I never expected to even know such a place existed, much less have a postcard from there and write about it on my blog ...

But there was still one more thing: 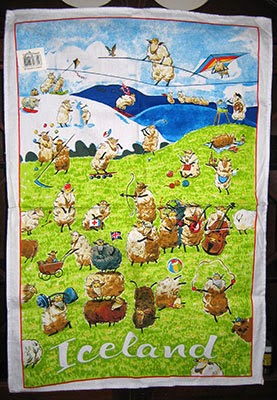 This tea towel actually made me squeal with delight!  All kinds of sheep doing all kinds of things.  Every time I look at it, a different one is my favorite - for instance, today I am loving the sheep holding the barbell in the lower left-hand corner.

What a nice group of souvenirs right?  It still makes me smile to think that Kristi sent this package to me.**

In conclusion, I have to say that I don't think I would ever have known her except for Facebook and cross-pollination.  For all of the annoyances and issues with social media, you can actually get to know some amazing people.

And if you are like me, you spend too much of your daily existence around less-than-amazing people, so knowing the other kind are out there is golden.


**This package also made me realize that I am a crappy souvenir-buyer.  Sigh.
Posted by Bridget at 6:01 AM
Labels: FB, friends, iceland, souvenirs

Great post! I've made some great friends and "met" some wonderful folks through blogging much the same way.

And that is a fabulous package. I'll have to be inspired while I'm on a work trip coming up...

What a fun post and a variety of interesting souvenirs. I think I will pass on visiting the museum. ;o)

I've got a few cross-pollinated friends too! My faacebook is mostly family (cousins who live far away), old friends from high school (who also live far away) and a few people I'm close with, but don't have a lot of time to see. It's a great way to feel "in touch" that fits with our busy lifestyle.

If you use common sense social media is a fantastic tool!! To me if you are careful what you post and who you talk to, it can be a LOT of fun!! I have experienced that crossover friendship and it's a great thing.

ANd what fantastic souvenirs!!!

fantastic key chain! and the tea towel is darling. What a fun surprise. Yes our crossing paths makes for some unique and wonderful friends. Makes the big world smaller eh?

Those are great souvenirs from Iceland, a place I've always wanted to go!

I have mixed feelings about Facebook. Sometimes I enjoy the connections, but other times people's comments just annoy me. I cannot stand the bragging ones!