And I never even thought about my monthly goal project!  May has been busy, and I think I just got caught up in all the things I had to do.  But I really want to try and keep myself going on this, so here is what did or did not happen as part of April's five goals.

1. Get back to more regular exercise.  So, I only made it to the gym once, but that was once more than previous months.  And I have also been doing more walking, with nicer weather and less ice and slush.  I took my bicycle to be tuned up, and am hoping to ride this weekend.

2.  My Agnes sweater is now history - at least until later in the year.  I just never picked it up after I got started, due to overall malaise, and just not being in the mood to knit a bulky sweater when it started to warm up.  I said if I didn't do any more on it, I'd frog it and wait, so that is what happened.

3.  Clean out a closet, and get rid of things that can't be repaired and/or are no longer worn.  I'm still working on this, switching my winter clothes for lighter-weight things.  But I did complete a clean-out of our bathroom closet, which was pretty daunting, let me tell you.  Here is the "before" picture: 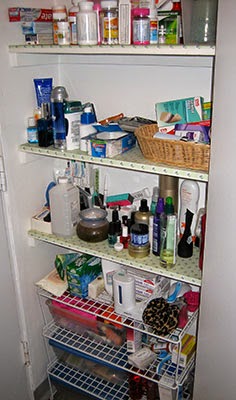 Maybe it doesn't look that bad to you, but it was really a mess.  Stuff was piled on top of stuff, there was a ton of expired medications, there were things in there that neither of us knew why we had.  Every time I'd need something from there, it would drive me crazy trying to find it.

Here is the "after" picture: 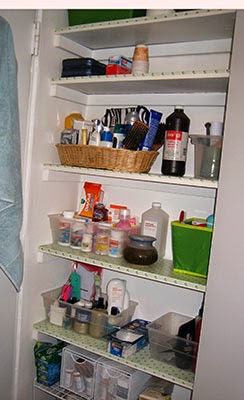 Some fabric and plastic bins to organize things as well as some metal mesh drawers meant that not only were things more organized, but they were easier to find!  And there was a lot more room in the closet than it appeared to have in its previous incarnation.  You can't really see the top shelf, but the stuff up there - a lot of extra light bulbs and such - are in a fabric bin, instead of rolling around, getting knocked down and broken.  WIN!

4.  Make/fix something using my sewing machine.  I did clean the piles o' stuff off the sewing machine, but then I decided that the room should be rearranged a bit, so didn't want to get started on anything.  I still want to start using it, but am determined to get the room in better shape before I do, so there is less moving around to do each time I want to get started.

All in all, I did a decent enough job in April.  Since I just thought about this now, and May is nearly half over, I'm going to just keep working on some of the above goals instead of adding new ones.  Hopefully the little bit of momentum will continue.

So that's it for now.  I have some more things to tell you, but they are for future posts.  Until then, I hope you are gaining some momentum as well on things you want to do.  Even baby steps are still steps, right??
Posted by Bridget at 5:44 AM
Labels: 2014-goals

Hey, I'm impressed that you even try to make goals. My basic goal is to get through each day!

It does seem like it's cleaning season, doesn't it? You are making more progress than I am!

Cleaning closet is a daunting task. I've been going through mine and getting rid of a lot of clutter. It's almost impossible to see my progress, but I know it's there!

Okay first of all, kudos for just being more active AND the one day more this month at the gym. Really, at the end of the day, we are all just trying to be more active, right? Healthy in that way. I too have been trying/struggling to tackle small areas of messy/clutter/pile whatever in my apartment and well um, you're never going to see a before photo of my stuff. But seriously, I like the organization and the bins and fabric. It's another good post. It does motivate me to keep going even if my steps especially in organizing are not even baby, more like ... crawling.

ps: I stuck my winter knitting sweater deep down in warm weather hibernation.

BYe bye Agnes! you weren't meant to be

I've got to clean out my clothes closet and head to the resale shop for new used clothes! Does that make any sense"?

Bridget- Um, you have a whole closet in your bathroom?