Last Monday in my e-mail, I got the prompt for that week's Ten on Tuesday, and thought it sounded like a fun one.  So I wrote the post, and scheduled it to appear  on Tuesday.  Since I would be at work on Tuesday (I had taken Monday off, since it was Bloomsday), I wouldn't have to remember to post it when I got home that evening.

As it turns out, if I had decided to wait and post on Tuesday, it never would have happened.

Monday evening while The Tim was at work, Dug the Doodle Dog and I went out for his evening walk, and it was so pleasant, with a nice breeze.  We were going along on our way home nicely.  I was going to give Dug a treat, and maybe give myself a manicure when we got home.  Next thing I remember, I woke up and I was lying in the middle of the street, with Dug sitting next to me.  I sat up, and saw that my glasses were broken, and I was covered in blood, and bleeding.  A woman brought a towel over, and was trying to help me, and a young man came up and asked if he could call someone for me (I was with it enough to give him the number for The Tim at work).  Another lady was kind enough to drive me and Dug home for The Tim to meet us there.

So when he got home about two seconds after I did, we headed over the ER at the Hospital of the University of Pennsylvania, which is not far from our house.  They of course took me back to a room immediately.  Since I couldn't remember anything about what happened, they wanted to keep me overnight for observation and do a bunch of tests.  I got ten stitches in my upper right lip, some inside, some outside.  I broke off part of a front tooth.  There were no observation rooms available, so I spent the next 24 hours in my ER room.  I had approximately 1,000 tests of  all kinds, was poked, prodded, questioned, had blood drawn and my temperature taken approximately 100 times, and finally they let me go home on Tuesday evening.

Coming home and taking a shower - washing off the dried blood and cinders from the street - was one of the best things ever.  I still hurt, I missed a week of work which pains me since I of course I didn't really have that much sick time.  I look much better than I did last week, but would still likely frighten small children (and have certainly startled a few adults!).

On  top of which, The Tim and I had both made plans to take the week we are currently in as vacation.  We had some plans to do day trips, and some other things.  Instead, I have been going to a bazillion different dr appts.

I am lucky.  No bones were broken or fractured, my injuries will [eventually] heal, and I can get my tooth fixed (though not soon enough to suit me).  But from the day-to-day standpoint, it really sucks.  My fave glasses are DOA, and I am in a lot of pain, besides looking like I lost a prize fight.

However, on the bright side, I did get to wear all of the wristbands they had available at the ER!  ;-) 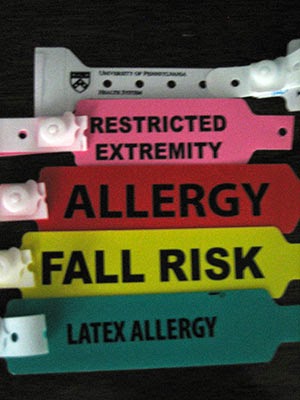 Posted by Bridget at 8:26 AM
Labels: Bloomsday, ER, kindness, vacation

Oh no, I hope all the tests reveal the cause of your fall and that you are soon on the road to recovery. It was fortunate someone was there to help you and to take you home.

OMG! Do you remember what happened now? I hope you're doing better!

I'm very sorry to hear this as it sounds quite painful, disruptive, and doctors tend to worry about loss of consciousness. I hope your pain eases soon and you heal quickly. I am glad they didn't give you a DNR wristband!

Yikes! I hope the doctors figure out what happened and that it was a one-time only kind of event. May you heal quickly!

I'll be thinking of you.

Oh my goodness! Sorry to hear what happened but glad to know you're recovering. Hopefully, you will find out the cause so future events can be prevented.

Oh my goodness, I am so glad you are okay. Did your blood sugar drop? Drop in blood pressure? Did you trip? No one was able to tell you what happened? Bless your heart, I am sure you gave The Tim and Dug a huge fright.
Hugs,
Meredith

Yikes!!! How frightening that must have been!!! Please let us know what the drs find out....

You poor thing! On top of the injuries, the shock of waking up like that sounds terrifying! I hope the doctors can figure out what happened.

So sorry your vacation week had to be altered. I hope you heal quickly!

Oh Bridget I am so sorry. Do they think someone hit you and drove away? That is horrible. I believe mankind is so much better than that! Shame on whoever.

Oh no! (As someone who had a really bad fall I get it!) I hope that you recover well and they find it to be a blip on the radar...never to happen again!

Bridget- That is scary! Too bad dogs don't talk or you could ask Dug.

Well that just sucks. Hope you are feeling better. Any ideas why you passed out? That's a bit more than scary.

I'm so sorry to hear about your fall! I hope you are feeling better by this point -- and getting some answers about the cause. Sending healing juju your way! XO

Oh my :( I'm so sorry to hear about your accident, and best wishes for speedy healing! Have they been able to tell you more about what happened yet?