This past Tuesday, a bunch of us attended this year's Stitch 'n Pitch game featuring the Philadelphia Phillies (yay!) vs. the New York Mets (not yay!).  The Mets are in first place, and the Phillies in last place in their division.  But nonetheless, we were undeterred in our enthusiasm.  The end result of the game was a loss by one run, but it was a good game and a wonderful time.

On my way to meet a friend at the subway, I passed a school in the neighborhood, and thought this yarn-bombing on the railing of the access ramp into the school building was pretty. 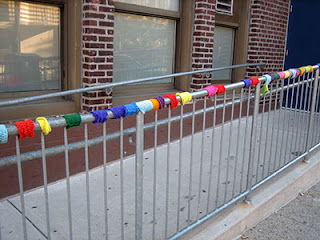 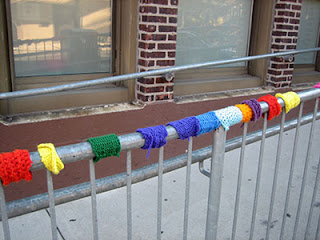 Then, while waiting for the friend, I was standing near the subway entrance next to one of the clinics of the Philadelphia Dept of Public Health.  Where I noticed for the first time ever a uniquely named garden behind the fence surrounding the parking lot. 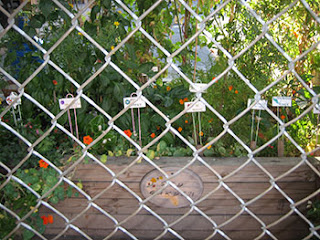 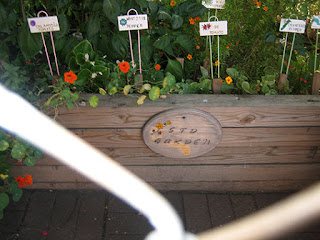 If you look closely, you can see that the little plaque says, "STD Garden."  There are "Chlamydia Tomato", "Hepatitis Pepper," and "HIV Tomato" markers, among other similarly-named plants.  It was ... interesting ...

Anyway, I was the last one to get to the park, so of course I had to see this picture, which was supposed to indicate that they waited so long, one had nearly starved to death. 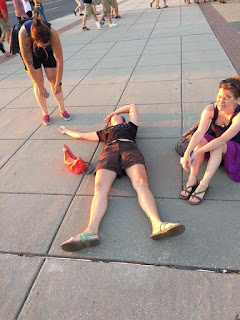 But eventually we were all there, and ready to go inside.  (I'm the one in the red shirt wearing sunglasses.) 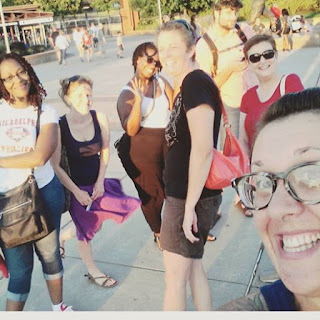 And proceeded to take some more ridiculous photos. 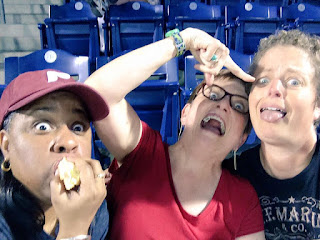 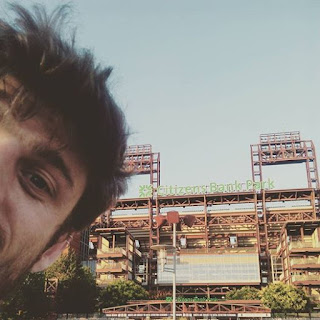 Well, you get the gist of things, right?

The giveaway this year was a project bag, and I for one really like it! 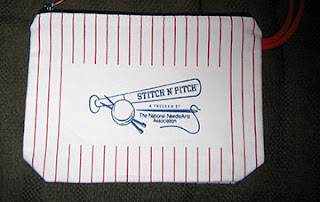 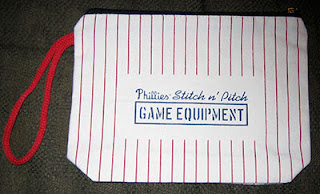 We really lucked out, the weather was just perfect, which is not something that usually is the case in late August in Philadelphia.  There were lots of other knitters, crocheters, embroiderers, etc. in our section, and we were a LOUD bunch if nothing else.  :-)

This is the fourth time I've gone to Stitch 'n Pitch, and each time  has been more fun than the last.  In my dream world, I'd love to go to a Pittsburgh Pirates Stitch 'n Pitch too, but like I said, that is my dream world.  In the meantime, I'm more than happy to see the Phillies, and though it's better when they win, just going to a game is enjoyable in itself.

Even if you are not a baseball fan, if you go with a bunch of friends, I can pretty much guarantee that you'll have a good time.
Posted by Bridget at 6:51 PM
Labels: baseball, phillies, std-garden, stitch-n-pitch-2015, yarnbombing

Wow....that does look like a good time. I drove past the Nationals new gorgeous stadium all winter long on my way to work thinking about going to a game. I need to see if there are any baseball watching stitchers down here.

I enjoyed going to ball games when we lived back in Cincinnati. Haven't been to one since then! Well unless you count the ones I used to go to when my husband played on a work team here in Virginia.
Your garden cracks me up!

I'm a fan of the stitch and pitch though I didn't make it this year. Baseball and Knitting = THE BEST (though I have to wash a lot between snacks)

I'm with you though, a GREAT time out. You and your pals definitely looked like you were having a fabulous time.