Last week at this time, I could not wait for the end of the workday (even more than usual), because we were going to leave after I got home for a long weekend in Rehoboth Beach with my niece Amanda and her husband Pat.  This had been planned for a few months, and to say I'd been looking forward to it would be an understatement.

When we go to Rehoboth Beach, Dug comes with us, and he *loves* it.  Amanda and Pat are two of his favorites, and he loves the house where we stay, because it has screened in back and front porches, and there is a little lake with a path around it in the back.  He thinks it's just the best.

The couple of days before, he'd had diarrhea, but he gets it occasionally, and nine times out of ten it clears up on its own.  So we piled ourselves and our stuff into the car, and arrived around 10:00 p.m.  We spent the rest of the evening laughing, talking, and drinking wine, and Dug went out a few times more than usual, but still just had the same problem, nothing else.  But overnight, he woke us up after having accidents two different times.  We figured we would run to the grocery store in the morning and get some chicken and rice and start him on a bland diet, as the vet usually suggests.

But in the morning the kitchen floor was covered in blood.  He seemed his usual self - not lethargic, or sick, or anything - but we decided we had to head home so we could take him to the vet.   So we ate breakfast, visited a little longer, and then packed up again and headed home.  We left around 10:00 a.m.

Fortunately, the vet said he was fine overall, but was suffering from colitis, and would need some antibiotics for 7 days, and the chicken-rice diet for 10 days.  By Saturday he was fine, and by Sunday his system was reacting properly.

So instead of a beach vacation, we had a long weekend at home with absolutely no plans.  It turned out to be great.  Saturday we checked out a new outlet mall not far from us, where The Tim found two pairs of shoes, and I got a sweater.  Then we came home, relaxed, and watched the Notre Dame football game.   Sunday we worked on some projects around the house, and caught up on some movies we'd recorded.  Monday we got our Halloween decorations out (not that we have that many, but still it's fun to decorate) and made our house look a little more spooky than usual.

I wish we'd been able to stay at the beach, but it all worked out for the best.  I even finished a book and got a good amount of knitting accomplished!  But most importantly of all, by the end of the weekend, this guy was back to being 100% healthy, and trying on some Halloween  costumes. 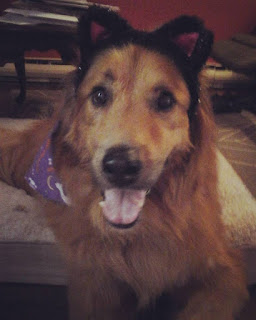 I'm sorry your beach vacation didn't last longer, but I'm glad Dug is on the mend.

So glad that it was nothing too serious and Dug is recovered. I would have been frantic!

Bridget- Poor Dug. I am glad he's back to himself.

He sure is cute in his CAT ears.

I always suspected that most dogs would LIKE to be cats. ;-)

Oh, no....my dear departed Yorkie did that to me once and it scared me to death. $1100 later (one visit to the emergency 24 hour vet) and she was fine. Me not so much. She lived to be 18 btw and had plenty of tummy aches after the big, expensive one. I also learned that chicken and rice cures most tummy troubles as well as an expensive vet visit.

So sorry your vacation was cut short . . . but so glad that Dug is on the mend. Sounds scary and Not Fun, all around. (We've done the chicken and rice diet with our dogs before. Works like a charm!) XO

That has happened to my Max several times, it is very scary. Your poor baby. We give Max plain yogurt on his food twice a day to coat his sensitive belly. It helps.
Hugs,
Meredith

Oh no! I'm glad he is better. That is pretty scary.

I'm SO glad he's feeling better and you were able to enjoy what sounds like a really nice relaxing weekend despite not being at the beach with your family. Anybody you consider a Dug favorite has to be top-notch, right? Wishing you all the best.