You May Have Already Seen These ...

but I'm gonna show them to you again.  These are the two items I finished during the Olympics but didn't want to show and tell you about until I knew my swap partner had received them.  Well, she did receive them, and posted on her blog today about it, so I can provide details here (whether or not you asked!).

Araignee was my dishcloth swap partner.  I knew she lived in Maryland, so my first dishcloth was inspired by that. Once I finished it, I realized it might have been easier to see the raised parts if I'd used a slightly different color.  but, I did get a picture so that it showed up, so I'm happy about that.

Project:  Maryland Dishcloth
Pattern:  Knitted Maryland Cloth
Yarn:  Sugar 'n Cream, colorway Cream
Needles:  Size 7US
Notes:  This is definitely something that looked like what it was supposed to be once it was blocked.  Before that, no one would be likely to have a clue.  ;-)

The second one had such a lovely stitch pattern, I decided I would like to incorporate it into a scarf or something sometime. 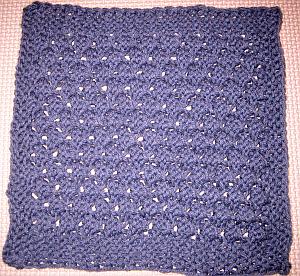 Project:  Blackberry Bramble Dishcloth
Pattern:  Blackberries Dishcloth
Yarn:  Cotton-Eases, colorway Violet
Needles: Size 7US
Notes:  This is a pattern where when starting, you have to pay close attention, but after the first or second pattern repeat, it's easy to remember.  And as I said above, I love the way the stitch pattern looks.

It's funny because for two small projects, I got a ton of satisfaction with how they turned out - and it was nice to work on something that was finished quickly.  There's a lot to be said for immediate gratification!

And now, let me show you what I received in my swap package!  Araignee outdid herself with this: 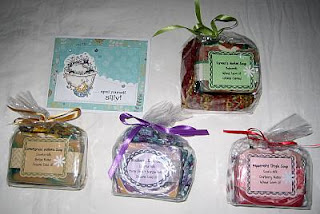 I opened up the box, and there were four little packages, plus a card she made herself!  There were four handmade soaps, and each one seemed to correspond to a season of the year.  Cool, huh?

However, she didn't stop there.  When you opened the little tie ribbons on the package, each one had a corresponding dishcloth: 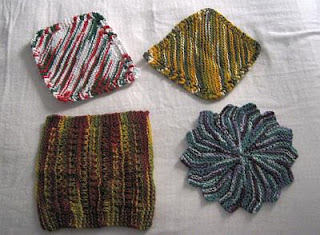 Aren't they lovely?  I was sooooo excited to open each one and see what it looked like.  I think this was such a lovely idea for a swap package, and I feel like I hit the jackpot.    Thanks, Araignee!

I have been in a few swaps, but the last one was years ago.  I liked the idea of this one, because it seemed manageable, and there was no feeling of it being a "contest" to see who could send the most, or spend the most.  I'm so glad I signed up, and am grateful to Kathy for getting it all set up and organized.

So it sounds like it was a good week for packages all the way around.  :-)
Posted by Bridget at 7:58 PM
Labels: 2016-knitting, fos, handmade-soap, socks, swaps

The dishcloths you received are cute too. I think EVERYONE had a good time with this swap.

I had fun matching the soap to the dishcloths. I got the idea when the fancy shmancy spa cloth I had started for you turned into a bust. I had no great dishcloth patterns up my sleeve but I did have a lot of soap....
Thanks again!

You both made lovely swap projects! It's always exciting to get "good mail", and it seems like there was quite a bit of that. I've just started keeping a dishcloth in progress for times when I have just a few minutes to knit. A friend called it mindless knitting, but it feels mindful and gratifying!

That was a fun swap, wasn't it? Fun idea to make a cloth with MD on it, and lucky you to get Araignee's soap along with some beautiful cloths. Now I need to check out your famous pumpkin socks!