Another FO With a Mistake, But It's For me So That's Fine

Well, apparently this was the Christmas Where Bridget Was Distracted While Knitting, because today's FO has a couple of weird mistakes.  However, since I was making these for myself, I decided not to sweat it. 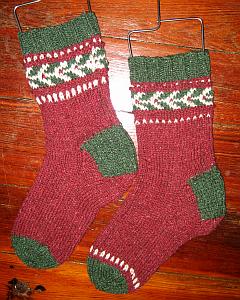 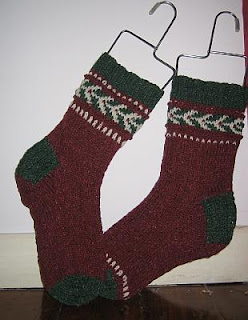 Notes:  I bought a kit for these a LONG time ago, when I first learned to knit, and decided that if you could knit Christmas socks, I wanted to learn to knit socks! (And the rest, of course, is history.)  The kit sat for many years; last year, I actually wound the yarn, but did nothing about it.  Then I decided this year was the year.

First off, let me say that I do really like this pattern, and will likely make it again.  But OMG, the yarn in the kit was the WORST.  It is a 50/50 cotton-wool blend, with absolutely no give, and really hard  on the hands to use.  I also suspect it will not wear well.  Also, in the kit there was a HUGE amount of the main color, and the white, and barely enough to make sure you could do the sections with green.

As you can see, one sock has two white rounds at the top that are noticeable but nothing near the foot.  That's the one I knit first, and I think I was so anxious to get it finished, and be closer to being done with the yarn, I completely forgot to do the final rows of white.

The other sock has the white rounds at the top that are barely visible, and I know what happened with both of them.  The first round (above the holly) I was doing as I was watching the Army/Navy football game, which ended up being a nail biter to the very end!  The next day, I was knitting while watching the Eagles/Rams game, also a nail biter to the very end!  However, I didn't notice that I'd done one round instead of two until I was at the heel.  And no way was I ripping back!  I did, however, remember to do the two white rounds near the toe.

So, they are not quite fraternal twins, nor are they identical, hence the name "fradentical."  They are the final pair for my 2017 Box o' Socks, and I'll have them for Christmas next year.:-)

I do have another FO from 2017 to show you, once I get some photos of it, which will hopefully be this week.  In the meantime, enjoy the rest of your weekend, and the last day of Christmas!
Posted by Bridget at 8:00 PM
Labels: 2017-box-o-socks, 2017-knitting, for-me, fos, socks

I love them! Weird works for me and not matchy-matchy...just matchy. It is COLD out there!! And now more forecast for Monday night.....

They are still cute!!! Think of them as Rudolph and Clarice --- the same, BUT different!

I made the mistake of knitting socks with cotton once (my first pair of socks actually). They stretched out HORRIBLY. Yours have some wool in them so hopefully they will fair better.
And they look great. I hope you got to wear them a bit around Christmas!

I think the socks look wonderful: you could call them "naughty"'and "nice."

They are lovely socks, and it's nice to have them ready for next year. The photos remind me of those "Can you spot the differences?" in Highlights magazine! :-)

That does sound like a frustrating project! But they are adorable and I can't see the mistakes.

I think they're just alike enough to be Fun, and I like the suggestions made by other creatively supportive commenters. So...they are your Naughty/Nice Rudolph/Clarice Highlights Holiday Socks!

I'm a big fan of non-matchy socks, so I adore yours. THe yarn sounds awful, so good on you for following through!

I love your socks and didn't even notice the difference in the white lines untilI went back and looked. I hate cotton yarn. I just cant. ...with it. I love the green heels and red body look . May have to make a knock off pair for next year!! Thanks for inspriation!

Love the idea of fradentical socks! They may not match exactly, but they both look great!

While they are not identical they are whimsical and perfect as far as I can see.

they look nearly identical to me, so that's good! lovely!!

You could have fooled me. I had to look pretty close to see what was different on them and I still didn't see everything you mentioned in the write up.

Those are GORGEOUS. I wish I could do colorwork.

Honestly, those are GORGEOUS.