Apparently, the Box 'o Socks activity - whereby knitters try to knit at least 12 pairs of socks that they keep in a box until January of the following year - has been around for a while now; however, I only heard of it once I started watching the Yarngasm knitting podcast.  (The link takes you to Kristin's review of everyone's 2017 efforts.  She manages the official KAL.)

As you know, I seldom participate in any "official" KALs, because inevitably, I feel [my own self-imposed] pressure, and have even occasionally failed to knit anything at all related to said KAL.  But this one just sounded like fun, and I enjoyed seeing everyone's socks, both on Ravelry and on podcasts.  So for 2017, I decided I was going to give it a try, but "unofficially."  And I surprised myself by completing 11 pairs over the course of the year, which are now out of the box and in my sock drawer (except for the holiday pair, put away with my other Christmas socks for next December). 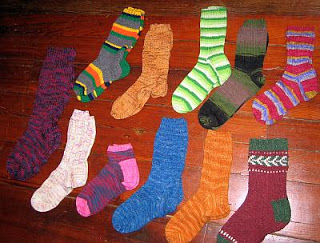 Two of these pairs (the Winter Berry socks on the far left and the Fradentical Holly Socks wouldn't have qualified for the official KAL anyway, since that requires socks knit from fingering/sock yarn only.  They qualify for me, 'cause I did my own thing, which is what you can do really with any knitting endeavor, but I digress ...

So anyhoo, I've given it some thought, and I'm gonna unofficially participate again this year.  For one thing, it really motivated me to do more knitting in general; it provided a great opportunity for using stash - only the Mojito socks (top, third from left) were knit from newly-purchased yarn; it made me try more patterns also in my pattern stash, which allowed me to learn some new things; and, possibly the best of all, it was so much fun to have 11 new pairs of socks, and the reminders of what/when/where I knitted them, that it made my really happy!

I've also decided that I'm going to do my own thing again this year, and even add another factor:  I'm going to try and make at least two pairs for The Tim.  Not just because he deserves them, but because it will mean I'll knit them without waiting until the last minute for his birthday or Christmas, and they'll be right there and ready.

I know Dee said she might give the Box o' Socks a try, so it will be fun to see what she knits.  I really had fun with it last year, and hope to enjoy it all even more this time around.

Will I make 12 pairs this year?  Will any actually be for The Tim?  Will I make even one pair?  Will I ever learn?

Your 2017 efforts are impressive indeed, and I bet your 2018 Box O' Socks will be equally wonderful. Enjoy all your new socks and get knitting! :-)

I loved seeing your box o sox. It made me realize that slow and steady effort could really result in enough socks to keep one clothed, plus what great socks they are! So much fun. I hope to make at least a couple of pairs this year.

I like UNOFFICIAL participation. That way, you can make your own rules! Your 2017 socks were all wonderful. I can't wait to see what you put in your 2018 sock-box! XO

What a pretty/gorgeous group of socks! I would love to do that, but I know as soon as I commit I will not be knitting socks - lol. Plus, as soon as I knit a pair for myself I want to wear them - no discipline at all! Have you started any? At least your first pair is finished!!

I am going to box up all the socks I make this year because I have too many of my own. I gave a bunch away at Christmas that I had never worn and it felt good to have some to give away.

I enjoyed my unofficial participation in the Box 'o Socks KAL. I need to reduce sock yarn stash, so I will likely unofficially participate again this year.

I love all the socks you knit, and personally, I think ANY yarn knit into socks should count.

I've heard about people knitting a 'box of socks' but I never understood that it was sort of a formal thing!!! Fingers crossed that you have success again this 2018 year!!!! You go...girl!!!

You can do it! And even if you don't you'll still have fun trying.

I love how all of your Kind, Gracious, Supportive commenters are assiduously avoiding your last Rhetorical Question: Will you ever learn?

No. No, you will not, Bridget. You will not ever learn. You will happily and optimistically barge along, knitting socks for your box, making allowances here and there, Customizing At Will, and being just as surprised at the end of it all with the socks you end up with.

I am desperately seeking some sock mojo to gain a box of socks!

Good for you! A sock knitter I am not, but I love to wear them, well when it is cold enough. Can't wait to see your socks for 2018.

Okay, I'm in for the unofficial box of socks but reserve the right to p*ss off at any given moment from it. LOL. I don't have to churn out a pair a month or anything that won't happen right?

I like that you're knitting for the Tim. It will make it more fun! By the way I missed the last post but I love those Holly Berry Socks. I don't understand what the problem is. They look wonderful!

Thats fantastic!!!! I only knit one pair of socks in 2017 and it was toward the beginning of the year. I really need to start using up my yarn stash...... Cant wait to see your progression this year!!

I like doing my own personal challenges and that keeps me happy. I love your box of socks of 2017 and await your new year! I'm trying to finish my son in law's sweater in a month (doable) then I need to knit my sister a sweater (promised) and in between knit for me me me.

Bridget- That's the spirit. No pressure. I think that I have that perverted mindset that I set myself up for failure.

Hey, even if you only make Tim's socks, that's a success, right?

It sounds like a cool idea, but knowing me, I'd end up with 12 singles to go with my other SSS victims. Sigh....... Love you Christmas sock! (The others are great as well!)