When I don't have to slog back and forth to work in a downpour, I love rainy days.  They just seem to provide a chance to slow down, and either do nothing at all, or tackle a project that you want to do, but find excuses not to when the weather is nice.

This past Sunday was a serious rainy day - starting overnight, and just pouring until Sunday evening.  It had been in the forecast, so I had already decided I wasn't going to make any other plans to do anything that required being outside.  And that worked out perfectly, because when I can, I try to remember on the Sunday prior to Ash Wednesday to make some Hot Cross Buns.

I'm not much of a bread maker - The Tim has that down to an art, and bakes bread at least once a week, so that works for me.  But I have always liked hot cross buns, and in our family, they have always been something we had during Lent, rather than at Easter as many on Facebook have pointed out in such a lovely fashion.  (I mean, really, is there nothing that someone can't find to "correct" you about???)  Of course, that always meant store-bought or if we were lucky, bakery versions of hot cross buns, but that was fine.

Years ago, when we lived in Chicago, I was perusing a Prevention magazine one day at lunchtime when I had forgotten my book and was at the mercy of what freebies were around the lunchroom, and I came across a recipe.  I decided to be adventurous and give it a try, and I was beyond pleased with the results.  So that became a yearly tradition, except for years I completely forgot, or last year, when I was in my cast for a broken ankle, and standing for any length of time was uncomfortable.

Over the years, as with any recipe you make over and over, I've tweaked things a bit.  This year, I decided that rather than adding only the cinnamon and nutmeg in the recipe, I'd just put in an amount that seemed right to me.  Turns out, that was one of my best ideas ever - this batch is seriously tasty!

So Sunday morning, I gathered the ingredients, mixed things together, and put the dough in a warm place to rise.  Then I sat down and did some knitting.

Then it was time to punch down the dough, let it rest, and form it into the individual rolls, which had to rise again.  So I did that, and sat down and did some reading.

I put them in the oven to bake, washed up the mess of dishes I'd created along with breakfast dishes, took them out of the oven to cool, and then took a shower.   By then The Tim was home from work, and we caught up on our days, and had dinner.  After dinner, I did the icing, cleaned up, and he did the dishes (our deal is that one of us cooks, the other washes the dishes).  And then we watched the Olympics and I did some more knitting.

Now *that's* what I call a perfect rainy day, and a nice end to the weekend!

Here's a shot of the buns before baking.  As you can see, the recipe makes a lot.   Since they freeze well, we will have them for breakfasts during all of Lent. 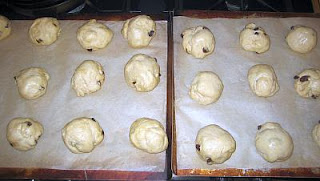 And here they are, baked and iced.  Boy did our house smell good! 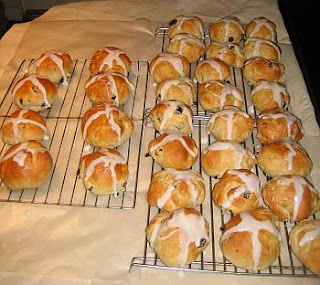 We were laughing, remembering a few years back when I made a batch, and then we went out for about an hour.  When we got home, Dug had helped himself to about 10 of them!  He was so pleased, we just couldn't even be upset.  And fortunately it had no bad effects on his system, if you get my drift ...  we only wish we still had that problem, I have to say.  :-(

I'm glad so many of you enjoyed my Knit-taalik story, and I only hope we can get a group going at work, that would be excellent.

Today at work was also really cool.  They are renovating two of the dioramas in the museum, and the glaziers were here to remove the glass (the panels are about 200 pounds each!).  It was so nerve-wracking (for us, for them it was their work), but really cool!  And then, I came back up to my desk and was able to see the restored LOVE statue go past on its way back where it belongs.  As I mentioned on Facebook, it was actually worth coming to work today.  Though unfortunately, now they expect us to do something.  Work really does cut into my day, you know?
Posted by Bridget at 11:54 AM
Labels: baking, Dug, hot-cross-buns, knitting, Lent, Philadelphia, reading, work

Those hot cross buns look great, Bridget! And it's so fun that you've created this tradition of baking them yourself. XO

Sounds like a perfect Sunday and those hot cross buns look delicious!

I must have had my head under a rock or something...I hadn't realized the LOVE piece was being restored....

(I mean, really, is there nothing that someone can't find to "correct" you about???)

When we are all in the midst of such mediocre, oh! I mean extraordinary, people, we MUST needs benefit from their knowledge, taste, and opinion!

Homemade bread and buns are the absolute best! Your buns look tasty!

I'm glad you had a relaxing, albeit, rainy day filled with knitting, reading, and bread making.

Mmmmmm......I tried making them once and they were rocks. When the kids were little I used to make this easter bread with lemon glaze and sprinkles that was so good. You made it in a coffee can. I think it had almonds and golden raisins too. I need to go look that up because now you've made me hungry!

YUM, YUM and did I mention --- YUM! (Can you believe I have never HAD a hot cross bun? But, they look delicious.)

When I lived in Orlando, I worked for Conway Glass. I'll let you in on a secret. The glass workers worry just as much as you did. A zip crack is a real possibility and NOT something that they want to happen. They may look cool, calm and efficient, but believe me....it is ALWAYS on their mind.

Hope you have a good rest of the day. I'm off to knit group in Doylestown tonight.

I don't think I've ever has a hot cross bun, but yours look so delicious that I certainly want to. I also hasn't realized that the LOVE statue was being repaired, but heard a nice piece on WHYY today about how cracks had been re-welded, it was re-painted in its original colors, and placed on a new base. ere's hoping that work can provide some sort of quality entertainment tomorrow!

I really do miss the rain around here. I love that you got to bake a favorite recipe and tweak it just right for this time of year. Even better you have premade breakfast lined up whoo hoo! I'm sorry the Dug is not here to test your baking, but I love that we got that story along with your hot cross buns in this post.xoxo

Oh, is there ANYTHING better than the smell and taste of homemade breads? I think not.

Those look so yummy. And that is a huge batch.

My dogs have a habit of helping themselves to bakery, too. One ate an entire loaf of whole wheat bread when no one was watching! And another ate most of a fresh peach pie. Lol fresh baked goods must smell really amazing to our dogs.

I love baked goods so very much. They are my downfall. I miss them but I really try to only have ONE bite of them . That said, I had valentine cookies and enjoyed every bite. Time to be good again. Fun to hear about the LOVE statue!!!

Rainy days comfort and inspire me. Despite the miserable sinus headaches they give me, I love to open the curtains to them and just soak in the gray.

my favorite recipes are the ones in my head memorized! our dear friends came over for dinner and she brought a loaf of home made banana bread and forgot the baking soda, we thought it was funny and it tasted just a good.