Hello everyone, I hope your week is off to a good start and that you had an enjoyable weekend.  Our weekend was great, if very busy.  Friday morning we headed home to Wheeling, West Virginia, to see some of my family.  My sister Mary Ellen and her husband Patrick live there, and my other sister Nancy, her husband Michael, and their 17-year-old granddaughter Anya were going to be in town for a visit.  We haven't seen Nancy and Michael for a few years, and have not seen Anya since she was about 10 years old.  My niece Amanda and her husband Pat decided to drive in from Baltimore to see everyone as well, so we knew it would be a good weekend - and it was!

A lot of the time was spent just catching up, laughing a lot, and enjoying being together.  But Saturday morning, we all got up to head downtown for the March for Our Lives rally.  I was really glad we decided to go, because in the past couple of years, every time I planned to participate in something, a health issue kept me away from it, and this time I got to not just attend, but be there with a nice chunk of family in my hometown.

Wheeling's population is currently about 30,000 people, and by the end of the rally, there were easily 200+ people there, which is a pretty good turnout for a cold Saturday morning, for something that - according to my sister - was not publicized that well.  Though she also said that they took three buses' worth of people to the march in DC.

Anyway, here are some photos from the day. 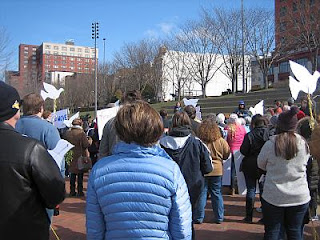 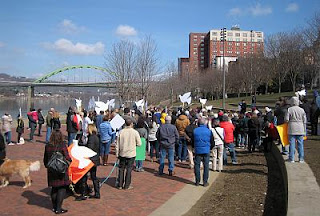 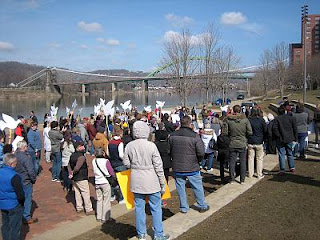 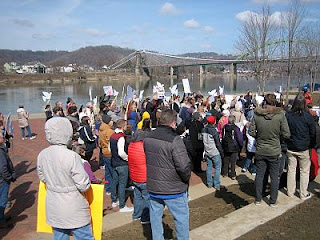 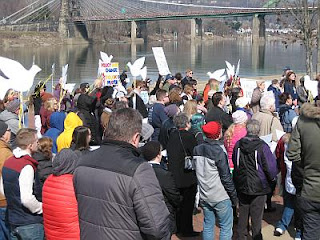 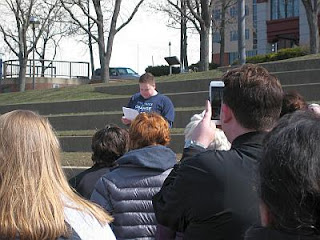 There were a nice variety of speakers, from local clergy, to college students, to local high school students.  There was even a girl who is in 8th grade who got up to say her piece, even though it was clear she was really nervous.  As you may know or may have imagined, West Virginia has a lot of people who hunt, so guns are not alien to the place.  Even some of the speakers either had guns themselves or grew up in a family of hunters, and so had guns in the home.  But every single one of them was in complete support of controlling access to guns, and were 100% convinced that the government was not trying to take their guns away from them.  I was encouraged by those statements, since so many other gun owners seem to go all the way in the other direction.

It's more than true that compared to a lot of places, Wheeling's rally was very small.  But it was no less sincere, and those participating were no less determined to have our government see their beliefs in action.  It was a wonderful group and also a group that is clearly in it to win it.  And across the country, we have to hope that other places that are not major metropolitan areas are taking a stand for themselves, their families, and their neighbors.  Small is still important, if you ask me.
Posted by Bridget at 7:09 PM
Labels: family, March-for-Our-Lives, weekends, Wheeling

There was a rally in Doylestown too, but I didn't hear about it until AFTER the event.

Small adds up. We just need to keep the momentum going until things are changed!

I'm SO glad you got to go to the rally.

The rallies here were small, too, and sadly some community members were nasty toward the presenters. Many do not want to give up their guns. They don't seem to understand that IF they joined the efforts to ban the automatic rifles that their 2nd Amendment rights would not be violated.

That many in W VA? That is actually impressive!

Small IS important. The very fact that a march was organized and was held is significant. Every voice matters; all movements begin with a single action.

Thanks for participating and sharing this here.

Lovely! Glad that you had a good weekend AND could get to/participate in the March!

I too live in the land of "gun owners" who also agree there needs to be much more done to control this problem. I hope that the lawmakers will listen, or as people are now freely saying... they will be voted out.

I'm so glad you had the chance to go! Small gatherings contribute to big change! XO

I think all those kids should be proud of themselves. They made a very well-organized, well-thought out statement to the nation.