We are in the home stretch before the arrival of my New Great Nephew (NGN), and I am actually ready in advance!  He is due April 17, though my niece told my sister that she thinks he'll be here sooner.  In any event, I will be sending off his gift later this week. 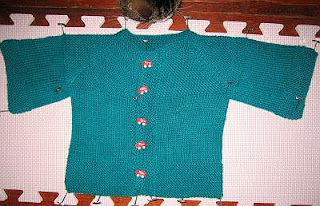 Project:  NGN Sweater (New Great Nephew Sweater) (link is to Ravelry project page)
Pattern:  Garter Yoke Baby Cardigan, by Jennifer Hoel (free on Ravelry)
Yarn:  Plymouth Yarn DK Merino Superwash, colorway 1132 Green Lake
Needles:  US size 4
Modifications:  I don't know that these are modifications necessarily, rather than mistakes in the pattern.  Anyway, the pattern says to pick up 38 stitches under each arm, and I found that to be impossible.  The upper part of the arms that were on stitch holders had 38 stitches, but I could not figure out any way to make room for 38 stitches on the underarm, so I picked up 19 under each one, and that seemed to work just fine.  The other thing was that when you got to the end of the arms, the pattern said "Row 1: K 38 sts.  Row 2:  P 38 sts."  That would have meant you only did a portion of the stitches, when I am 99.99% sure that the pattern meant to K and P all the stitches you had on the needles!

Notes/comments:  This pattern was so much fun to knit, and really very simple.  Except for the two instances mentioned above, it was easy to understand and the instructions made sense.  I wanted to choose a color of yarn that was not strictly "little boy" color, and I thought the color was not just gender-neutral, but good for springtime.  Usually Plymouth yarns are lovely but this one was pretty splitty, and that was annoying until I got used to it.

The buttons (shown in a close-up above, complete with Jack hair!), were another story.  Again, I didn't want buttons that screamed "little boy" but I was also not willing to devote a quest to finding ones that were the Most Perfect Buttons in the World.  I was happy with these little Volkswagen Beetle buttons in red.  They made a nice contrast, and were kind of an homage to my sister and brother-in-law (NGN's grandparents), who had a VW bug for years before they had children. 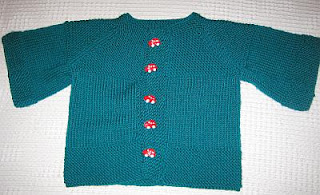 Anyway, once the knitting was finished, I gave it a wash on the delicate cycle, 10 minutes in the delicate air dry cycle, and then blocked it to dry the rest of the way, because I wanted it to look as nice as possible since it's a gift.  Plus, this also served to get rid of all of Jack's fur that had worked its way into the project as it was being knit.  I can recommend this pattern to anyone who has a knit-worthy baby on the way.

What sweet, sweet little buttons! The perfect touch to a great sweater. (I'm still looking through patterns to knit for my own New Great Nephew -- but I've got until September, so . . . plenty of time!!!)
XO

That turned out great Bridget! Congratulations. I do like the buttons a lot. So glad I got to see this in person when it wasn't quite finished!!

That is a terrific sweater and I'm sure that your niece and NGN will love it! Congratulations on a wonderful sweater, and on finishing ahead of time!

All my projects have cat hair, too. Unavoidable!

This is just so cute! I love it and those buttons!!

So cute - and I love the buttons!

It all came together perfectly. They'll love it.

That is just the cutest sweater! I love the buttons!

It is a beautiful sweater Bridget, it will be cherished.