And a Good Time Was Had by All

Hi there!  I thought I'd post before today, but apparently I didn't get to it - I lead such an exciting life.  As in, cleaning for company, having company, cleaning up AFTER company, and having dr appts.  You know you are jealous ...

I hope you had a lovely Easter/Passover weekend.  We had a good one (the reason for the cleaning).  My niece Amanda and her husband Pat came for the weekend as they usually do on Easter weekend.  We always have so much fun, and fear not, the Inappropriate Easter Eggs were included.  I present 2018's offering: 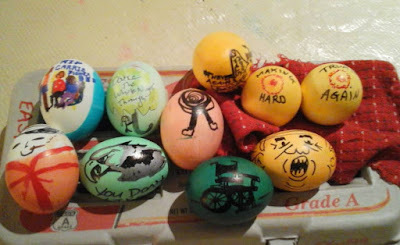 This year, we have:  Carrie Fisher dying on a plane, Debbie Reynolds memoriam, #NeverAgain, Stormy Daniels duo, Trump, Stephen Hawking's wheelchair, Stephen Hawking being swallowed into a black hole, Eagles Super Bowl, and Hugh Hefner memoriam.  I was criticized for not boiling enough eggs for all of the ideas that were ready this year, but hindsight is always 20/20, right???  Needless to say, there was a great deal of hilarity related to this and just hanging out in general.

I took yesterday off and had a nice day at home with The Tim and the kitties.  In the afternoon, I got the stitches removed from Part 1 of my dental implant procedure, but otherwise, it was a quiet and calm day of knitting and watching things we'd recorded.  I have a sinking feeling that a cold is looming, so it was nice to stay put.

I've fallen behind (so to speak) with my Box o' Socks efforts, since I was focusing on finishing the baby sweater in the previous post.  But now that it is on the way to its destination, I can get back to my other projects.  The socks I'm knitting are 70% finished, so I just need to get back to those, and my Big Blue Sweater is, I think, about 50% finished, so I'm not doing too bad.  And now that I have no real deadlines, I should be moving along at my usual pace.  I'm not in any big hurry for anything, but I don't want to let things sit for any length of time if I can help it.

There's not much else to report at the moment.  The snow that other places got yesterday was just rain here, so it's dried up by now, though it's supposed to rain today and tomorrow - April showers, right?  Everyone is enjoying Villanova's championship win last night in the NCAA March Madness, so that's fun.  It sounds like another parade is in the offing here!  And in the Women's NCAA championship, Notre Dame won, so that was exciting for us, as they are one of our faves.  To be honest, I was kinda afraid that the men's final would be Loyola vs. Villanova and that it would be way too stressful for me, as then it would have been the Jesuits vs. the Local team.  For better or for worse, that didn't occur, so I could concentrate on just cheering for the Wildcats.  :-)

I hope your week has started well, and that some kind of spring is finding it's way to you.  We have daffodils blooming in the front planter of our house!!!!
Posted by Bridget at 9:31 AM
Labels: basketball, Easter, family, Inappropriate-Easter-Eggs, knitting, March-Madness, weekends

You never, ever have enough eggs for dyeing do you? I could have boiled a truck full and it wouldn't be enough. People do love to dye eggs. Yours are so much fun!

Glad you had a good Easter weekend. I must admit, I've never heard of Inappropriate Easter Eggs. LOL Considering all that is going on, I'm not sure you EVER could have dyed up enough eggs.

I see lots of egg salad, or maybe deviled eggs in your future. Our 5 year old grandson has his version: inrepropriate! Your eggs are hilarious!

Great eggs! I had forgotten how you make inappropriate ones each year - hysterical. And, yes, you need to get back to socks!!

Totally jealous of the sitting and knitting!!!

Your eggs just crack me up!!! I'm so glad you had a nice weekend, with some time to relax AND a Villanova win! XO