Hello all - I hope you had a good weekend.  Mine was nice - a good combination of being productive and not doing anything.  Then in the middle of the night last night, I woke up, and the cold that had been seeming to be on its way for a week or so, had apparently decided to arrive.  When I got up this morning, I felt so awful, I took a sick day from work.  I've spent a lot of the day sleeping, and between that and the cold meds, I'm feeling a bit more with it, so I thought I'd write a post, though I don't really have much to report.

Over the last week, I have gotten a fair amount of knitting done, which has been nice.  I had put everything else aside while concentrating on the baby sweater, so I felt a bit behind on things.  Fortunately, none of my other knitting projects have any outside deadlines, so it's not an issue that they were briefly ignored.  I am a little bit bummed, since I realized after paying some bills that I won't be able to join Vera and Dee this coming weekend at the Allentown Fiber Festival.  Yes, I *could* go, but I couldn't buy anything.  And I know I don't have to, but I like to get at least some little thing to remember the event.  So I'll just keep working with what I have, and hope to go next year.  The costs so far for my dental implant have really taken a huge chunk out of our finances.  The periodontist doesn't take dental insurance, and though they are nice enough to send in the paperwork for you, you still have to cough up payment when you're there.

Last night I tried a recipe for dinner that sounded like it would be really good, but it was a bust.  Not inedible, but definitely not worth making the effort.  I guess they can't all be winners, right?

Not much else is new otherwise.  Supposedly the weather is supposed to become more spring-like this week around here, so that will be a nice change.  I'm just glad that our daffodils survived after blooming and then getting snowed on!  They managed to hang in there and stay happy, which I guess is something we should all try to take to heart.  :-)

We'll see what else this week brings - I hope you have one that treats you well! 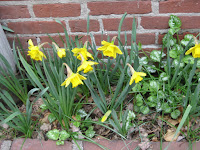 IM sorry you aren't going to the festival but it shows great restraint. I wouldn't want to go and not purchase either

Feel better, Bridget. (I hear you about the dental bills. I needed a crown when I was the only one employed & my dentist also doesn't take insurance. That hurt way worse than my teeth.)

I stayed home today as well, with a headache. I haven't gotten anything accomplished either. Fortunately headaches usually go away faster than a cold, I hope you feel better soon.

I hope you start to feel better soon. Budgets have a tendency to impact our lives, so I understand your decision to not go to the festival. Reorganize your stash, and you'll find some "new" yarn to knit.

Daffodils are so resilient! Yours are just lovely. :-)
I hope you're feeling better quickly, Bridget. It's no fun to be sick ever -- but especially when it sounds like spring may arrive soon.
XO
(Dental work is just stupid-expensive, isn't it? I have to have a crown next month - yippee - and I no longer have insurance. Ugh. It's like a double whammy.)

I hope you are feeling better soon. Medical stuff sure can be a pain in the wallet. (Ask me how I know......)

Sorry to hear you are under the weather. Everyone seems to be sick at the moment. It's got to be this terrible weather. Snow flurries this morning and now 80's by Friday? CRAZY!

SO sorry you are ill and will miss the fiber festival. I'd be too tempted to buy yarn I don't need so I wouldn't be going either. Hugs and get well.

Ugh, I am sorry you are not feeling well! I am hoping that spring arrives and STAYS soon!

It's so disappointing to spend time making a worky recipe and have it come out tasting like something you could have tossed together in twenty minutes. I've done that several times.

Lots of The Crud going around. Take care and feel better soon.

Feel better Bridget!! We will miss you Saturday, but certainly understand. HATE Dental bills (or any bills, really).

I hope you feel better soon. I had one nasty cold that led to a never ending sinus infection. I managed to dodge the second cold the toddler tried to gift me, ha!