It Was One of the Good Weekends

Well, it's Monday again.  And time for another team-building meeting later today at work.  Ugh.  Whenever anyone says "team-building" I want to throw up.  But I'll save that for later, and instead tell you about my weekend.  Which was lovely.

Admittedly, there are very few times when I don't enjoy a weekend - I mean, any day not at work is a day well spent, if you ask me.  But you know how every once in a while, even if you weren't travelling, or counting money someone gave you, or eating massive amounts of chocolate that will have no negative affects on your person, it's still a standout weekend?  That was this past one.

Saturday we started out by making a trip across the bridge to New Jersey.   We generally go there because gasoline is cheaper (even though someone pumps it for you - how does that work out??), and if we have other places we want to stop (Target, Kohls, the liquor store,* etc.), it makes it a worthwhile trip.  This time, we wanted to go to Target, the liquor store, and I wanted to stop at the Cherry Hill Mall to return a gift that was the wrong size.  We got an early start, which made it all very pleasant, because we were able to avoid crowds.  And it was one of those outings where everything we wanted to get and do went smoothly.  So by noon we were home again and had the rest of the day to ourselves.  I walked over to Loop since it was Local Yarn Store Day, and boy was it busy!  Which made me very happy.  I did buy two skeins of Andorra yarn from Kelbourne Woolens, for the Adventura Shawl by Laura Nelkin.  I hadn't necessarily planned to buy anything, but they had the sample shawl(s) there and they were lovely, and since I had a store credit which would cover the cost and still leave some in the account, I figured I'd go ahead.  I purchased a skein if Kelly Green and Lavender. 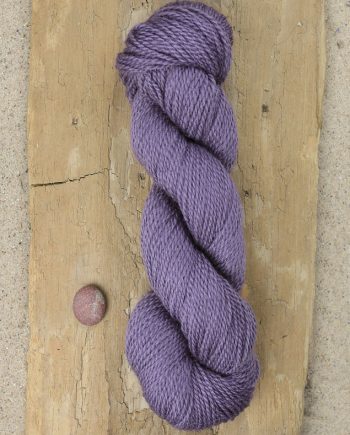 Then I came home and spent the rest of the day and evening hanging out with The Tim and the kitties, and knitting on a couple of already underway projects.  All in all, a lovely day.

Sunday I was inspired to go to the gym and work out first thing (I know!).  Then after breakfast, I decided before I took a shower, I'd do some cleaning (Again - I know!).  I have to say I was quite pleased with myself to have both things completely finished well before noon.  After then cleaning up mine own self, I headed out to get a few items we needed that are not available at places like Target.  Then I spent the rest of the afternoon knitting, watching a couple of podcasts, and watching the Penguins/Flyers hockey playoff game (the Flyers lost, but they gave the Penguins a good run).

Besides the niceness of the weekend, I can also report that last Tuesday, my new great-nephew was born!  (You may recall I made this sweater for him.) 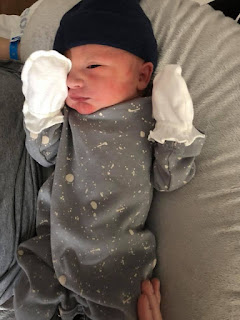 Here he is with his big sister Penn - I think this picture is so adorable! 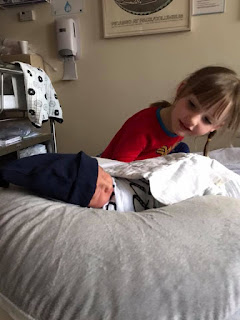 But my *very* favorite one is this one, where Penn first visited her mom Julie and new brother in the hospital. 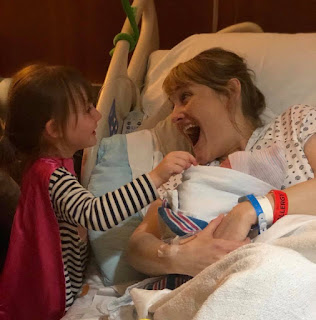 From all reports, everyone is doing well, and Julie and Oden left the hospital to go home on Friday.  I'm sure they have many adventures ahead.

They had narrowed down the name choices to Rowan or Oden (which of course we assumed was "Odin" but it's none of our beeswax how they spell it.  As The Tim pointed out, at least they didn't do the celebrity thing and give the kid a name like Doorknob or Paper Clip), and I'm guessing Oden was chosen in the end because it's less common these days.  Anyhoo, he has arrived and is healthy, so that is the ideal.

I hope your weekend was a good one as well.  The weather is supposed to be more spring-like here this coming week, so hopefully that will be the case.  After all, we deserve spring weather, not only because it IS spring, but because of having to endure the aforementioned team-building ... ;-)

*technically, we are breaking the law buying liquor in New Jersey and bringing it across the state line to Pennsylvania.  So if I ever mysteriously disappear, you'll know we were busted.
Posted by Bridget at 8:23 AM
Labels: family, knitting, spring, stash, weekends

That last photo is precious!!! Best wishes to the new family.

doorknob is a respectable name - not! love you humor, I love the last photo the best, what joy in their faces. I was out and about the whole weekend long with lots of driving and I'm so happy to be home sweet home :)

What a precious photo! Congratulations

That is a good weekend, and also love that last photo. All the best to Oden and his family! (I have a great nephew named Stellar - cute kid, but I had to bite my tongue when they told me his name.)

Congratulations on a great weekend and your new family member

I like the name Oden, but admittedly, I'm a fan of odd names. In our family we've got Paisley and Rowan (both girls), my cousin's boys Matisse, Neji, Osiris and Phoenix. We've also got an Esme, a Hunter, and an Archer.

Can't remember the last time someone pumped my gasoline! Worth a trip just for that.

What a great weekend and welcome little Oden!

That mom greeting her older daughter with the new baby is the BEST. Her face is radiant. Her Joy is self evident. She is so happy to see her big girl. ! wow

Ahhh . . . nothing like a little forced team-building to begin the week. Glad to hear your weekend was a good one -- and welcome to little Oden. What precious photos (especially that last one). XO