I do love to knit socks.  And though I can generally knit a pair in a shorter amount of time than it used to take, I am not one of those people who can just churn them out like a machine.  Some just take a while, whether due to yarn, pattern, other projects, or life in general.

But this pair flew off the needles!  I think it was a combination of wanting to see what stripe sequence came next, and at a certain point, wanting to finish them by the end of February (the toes were kitchenered during the evening of February 28). 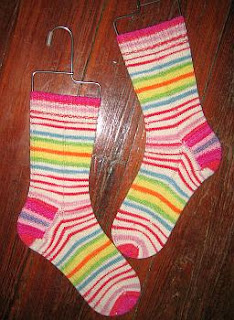 Project:  Vanilla Valentine Socks
Pattern:  Classic Socks for the Family
Yarn:  Must Stash Yarn self-striping yarn, in one of their Must Match! colorways, called Be Mine
Needles:  US size 1
Modifications:  None
Comments:  This yarn has been in my stash for a couple of years.  I'd come across it and think, oh I want to wait until a February to knit this, and then would forget I had it.  Anyway, I finally remembered in time, and wound this up.  The way it winds is fascinating, since it is a Must Match! colorway.  It arrives in a single skein, but when you wind it, it separates into two separate balls.  You knit one from the outside of the ball, and the other from the inside, and you have matching socks, which as far as I'm concerned is a miracle.

The yarn is lovely to knit, and the colors are so pretty.  Also, I actually like to knit from two balls (though I am too lazy to divide skeins myself), as I will usually do the cuff on one, and then the other; then the leg, etc. so that by the time I am doing the toes, I have only the toes left to do on each sock. Which is another reason I think the knitting went so quickly.

Anyway, I'm pleased with these, though I have to admit I do wish there was not so much white in the color scheme.  But that's just me.  I'm on track now, as these are my second pair of socks for my 2018 Box o' Socks.

I really recommend this yarn.  Her colorways are amazing, and it's really nice to use.  She also does a podcast with the woman behind Little Skein in the Big Wool, and they talk not just about their knitting, dyeing, etc., but also their dogs ... so you know I find it interesting!  :-)

Those are so pretty Bridget - really cheerful, playful, etc. I like the white in them breaking up the colors.

❤️ this pair of socks and the striping!

Those are perfect February socks!

That whole ta-da! matching socks! process never fails to amaze and fascinate me.

You inspired me to cast on a pair of socks. Knit in the round, of course, with the DREADED purl stitch for texture. Bwahahahahahaha!

These are really lovely socks. And, I love the way the stripes match perfectly. Have a great week, Pat

Perfect socks for February (or for any time really with those night bright colors). They make good spring socks too.

I will try to listen to that podcast tomorrow. THANKS for the heads up. I LOVE your socks. A little white makes them bright. Great finish

Those stripes make me so happy!!! Perfect for Valentine's. They look like a box of candy hearts.