In case you are wondering what the title of this post means, let me tell you about Hamlet. 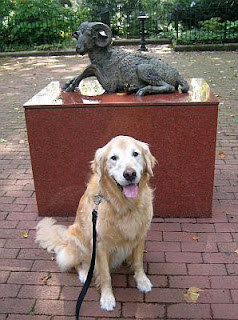 Meet the newest member of our family!  Yep, this sweet pup is now officially part of our merry band of misfits.

Back in the fall, you may or may not remember that I visited my friend Kathy, who helped me seam together my Cranberry Custom Fit Sweater.  Kathy told me on that day, "Oh by the way, I found your next dog."  As it turns out, Kathy's husband Sam (who I haven't met yet) is a volunteer for a local group who assist blind people.  He knew a couple who each had guide dogs who were getting ready to retire them, and Kathy thought either dog would be good for us - already grown, well-trained, and well-behaved.  So I told her to let me know if anything developed.

To back up a bit, a couple of months ago, The Tim had told me he thought he was ready to adopt another dog.  Now as far as that goes, I am not picky at all.  The Tim had many things on his list of the perfect dog, and among them were that a) the dog not be too old, so we would have it with us longer, and b) the dog not be a really big dog, since it became difficult to lift Dug when he got really sick.  I could appreciate this, and so did not point out any dogs I knew that were available that fell into these categories.

About six weeks ago, Kathy told me that the dogs she had mentioned were going to be retired very soon, and gave me the number of the man in the couple, named Jeff, and said to call him.  So I gave him a call, and we talked for quite a while.  Never having had any reason to really think about it, I was surprised to learn that guide dogs were "retired."  But it turns out that it's fairly common.  A perfect guide dog has to be on top of its game, and though Jeff's dog was still perfectly healthy, he said the dog had slowed down some, and he had applied for a new dog.  Apparently, you are only accepted into a new session when they think they have a perfect dog, based on your profile.  Jeff expected to go to the session in October, and the dog, named Hamlet, would probably come for a visit over a summer weekend, to see how we all thought it might work (or not).

The kicker of course:  the dog was 9 years old, and a Golden Retriever.

When I reported this part to The Tim, he said, "Oh that would be great - almost like another Dug!"  Which of course meant that his list of qualifications meant nothing in the end. :-) (Also, I think the English major in him was thrilled.)

Jeff called about three weeks ago, with news that he had been contacted to say that they found him a perfect match dog but instead of October, the session he was in would start today - way ahead of what we all had expected!  So we quickly arranged for Hamlet to visit the weekend after July 4.

Surprisingly, all went well.  By the time the weekend was over, Pip and Jack were *very* close to being friends with Hamlet, and he was clearly interested in them, but not aggressive in any way.  The Koodle, who of course thinks of himself as a real badass, spent the weekend in the basement like the chicken he really is ...

Saturday afternoon, we headed over to NJ where Jeff and his wife live, to pick up Hamlet to join our family for good.  On the one hand, I felt bad because of course we were taking him from the home he knew for most of his life, complete with his people, and Karma, the black lab guide dog who belongs to Jeff's wife (and who is already placed in a new home as well, once she goes to her session in October).  I think Hamlet is still a bit confused, but he is adjusting, and is getting a TON of attention, walks, treats, and love.  The cats - because, well, cats - have of course forgotten they ever met him, and so we are starting again from the beginning.  But in no time I'm sure the household will be back to the usual routine.

Though just to let you know, Pip is already friends with Hamlet because why not if there is someone else to narc on?  He would however, like you to know in case you did not that there is a DOG in the house and apparently the DOG will be staying and did you know the DOG drank some of Pip's water?????!!!!!  Trust me, we're hearing all about it ...

Hopefully Hamlet will decide our house is a good place to be and he will be happy that he joined the family.  We couldn't be more thrilled! 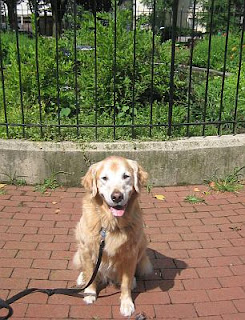 I have to warn you, there will be more stories about him in the days to come, and you can expect to be subjected to many more photos - so prepare for the deluge. :-)
Posted by Bridget at 10:19 AM
Labels: cats, family, Hamlet-the-dog, pets

Oh, Bridget! This is such wonderful news! Hamlet is the luckiest dog in the world . . . to have found you and Tim and the kitties to spend the rest of his life with. I am so, so happy for you -- and I can't wait to hear more about him in the days to come. WELCOME HAMLET! XOXO
(Your post brought tears, Bridget.)

I'm so glad Hamlet will be staying with you.

Your stories of Pip just crack me up. Enjoy all those walks around town with a pup of your own now!!!

I'm ready for ALL the stories and so happy that Hamlet will spend the rest of his life with you guys. I am certain he will settle in just fine with all the human and cat love he will be getting!

So...no equivocating on The Tim's part, a la "To adopt...or not to adopt, that is the question" when it came right down to it?

(Looking at Hamlet, I can see why. Too funny how The Criteria went right out the window.)

Hamlet has a sweet smile. Congratulations!

Yay-Yay-Yay!!!! Hamlet is just wonderful - so handsome. You, The Tim, all the kitties and Hamlet are just so lucky to have each other. Bring on the pictures and stories - I can't wait!

My heart has grown so many sizes; I can only imagine how big all hearts there are! (I'm especially interested in Jack's thoughts on this matter.)

Oh he's so handsome! I'm so happy for you!
After Tux and Rocky died... Dave said we'd only every have two cats at a time from then on... so Rupert and Peno were supposed to be it... and you know how long that lasted! Men's lists and rules never really mean anything when fur babies are involved!
I can't wait to see and hear about his adventures with you.

This is AWESOME!! Hamlet is gorgeous and I think he found the perfect home! Congratulations to all of you!

Congratulations! So happy for you all. He looks like a very sweet boy, I wish you all the best of times together!

What a story!!! How lucky he is to have found you.

This is such wonderful news! It's so nice that you all found each other.

(I had no idea that seeing eye dogs retired, but it does make sense.)
I can't wait to hear about the adventures at your house.

Oh Bridget, I am squealing a bit here at my desk as I read this fantastic news. Hamlet sounds wonderful and deserves to retire and just be loved. I am so happy for all of you and that includes the kitties too. He is GORGEOUS!

Hamlet is one lucky dog!! he will have the best life ever and you have such an open heart to welcome into the family.