Yesterday morning The Tim and I got ourselves into our trusty little car, and headed to the New Jersey Sheep and Fiber Festival.  We had gone a couple of years ago, but missed it since then for various reasons, so we were excited to go back.  It's a mostly quiet, pretty drive, generally with no serious traffic, and not so far away that you start to get itchy being in the car.  I forgot my camera but I know several others have posted photos of the animals and several of the booths, so I am not worried that you will miss knowing what sheep, alpaca, and llamas look like.  Though I had never seen a Jacob sheep with 5 horns until yesterday and it fascinated me, I have to be honest.  The angora bunnies were soooo sweet and didn't mind if you petted them, so I got my petting-the-animals fix. Well, at least a little of it ...

There were so many wonderful vendors, and I really really wished I had more available funds, but also didn't want to walk away regretting having spent too much.  So I made these two very small, but very happy purchases. 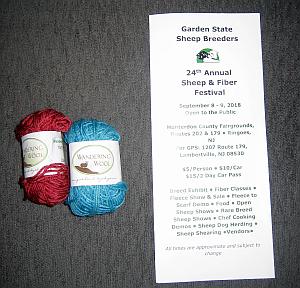 These two minis will go into my mitred square blanket, and remind me of a very happy day.  They were purchased from a lovely young lady at the Wandering Wool booth, and at $3 each, were a true bargain.  She was so friendly, and we chatted about the sweater she was wearing (one of Thea Colman's designs), the one she was knitting (her first attempt at a yoked sweater), and it was altogether a favorable experience.  She was as nice to me as if I'd purchased $1000.00 worth of yarn.

Unlike the one woman who was the owner of a sheep I was admiring.  She said, "I hope you're not a vegetarian, because this sheep is good eating."  I said that I was a vegetarian, and she said, "Oh I can't *wait* to see what you have to say to me."  And I responded, "I don't really have anything to say.  I'm an adult and I know how the world works."  And then I walked away, feeling bad for the sheep on several levels.

Sadly, I didn't see any of the friends I knew were there.  I did run into two people from our craft group at work, who were there because I'd sent an e-mail about it. So I was glad they decided to check it out.

But oh what a lovely way to spend a lovely day!

******
The other day I was poking around on Ravelry, and I came across something that I couldn't decide impressed me or appalled me.  In the end, I was impressed because, well, think how this poor woman's wrists feel!  I showed it to The Tim, and told him not to get any ideas ...

******
I don't know about you, but last week and the week before, there were a lot of back-to-school pictures in my Facebook feed.  But this one is and will always be my favorite.

My niece Julie took this on her daughter Penn's first day of Pre-K.  I love how dad Keith and baby Oden look pleased, while Penn has followed her mother's instructions for a thumbs-up, but with her own twist to it.  From all accounts, once they got to the school and she saw her name on the classroom board, she was happy.  But this photo says it all.  I hear you Penn, I really do!

Baby Oden (aka "Little Brudder") is doing well, and is becoming such a cutie!  Here is a recent photo.


******
And now, today.  Right now as I write this, it's cool and raining outside.  I'm sitting here with a cup of tea, with Jack sitting on my lap and the others nearby.  I think this will be a cozy day.  Such a nice feeling - I'm gonna enjoy it in every way I can!
Posted by Bridget at 10:04 AM
Labels: knitting, nj-sheep-fiber, Oden, Penn, yarn

You made some great purchases at the Fair. I wish I had a tons of money to spend on yarn but that is not the case. I did cave in and placed and order for yarn last night but it is all for Christmas presents so it is accounted for. Love the photo of Penn, priceless. I am glad you walked away from hat women, how rude! I don't eat red meat, lamb or pork but would not have tolerated that behavior. How gross! Have a good week.

Bridget- I had no idea there was a NJ Festival- so cool you got to go.

What is UP with some people? I'm glad you put her back in her box.

Why do some people have to be so adversarial? Couldn't sheep woman just have said thank you????

I missed the sheep with five horns. That would have been something to take a photo of. LOL

We had a great time. Bonny couldn't stay long, but Vera and I saw it all (I think).

Okay... after picking myself up off the floor after the Knitting Over-achiever! What the heck?? Like did this take her a decade? LOL Because it sure as heck would take me that long to knit that many socks... maybe even longer! Hahahaha!

And, YES... the cool weather is a welcome change!

That back to school pic is a classic!

And wow... that' sheep lady.... some people just live on conflict!

A fun festival for sure. Sorry we did not hook up. People amaze me...not always in a good way.

I was only at NJ Sheep for a short time, and am sorry to have missed you, but I'm very glad you made those lovely purchases from Wandering Wools. I loved her rainbow gradients, and while she didn't have any of them there for socks (just an example of the gorgeous finished sock), she said she'd be glad to dye some for me. She was so pleasant and accommodating to chat with, and one of my favorite vendors there. And way to go, Penn!

I feel sorry for the sheep too :( both of my kids are vegetarians and I am off and on again . I wish I was there!!

Poor Penn! I felt the same way on my first day of school.

I just had to go and click on the Ravelry link and now that's all I can think about. Wow...

I loved your response. Im an adult. I know how the world works. GOOD FOR YOU

I love your perfect, true "souvenir" yarn purchase. They will make wonderful additions to your blanket, and will always remind you of a fun day! And . . . I am going to remember your comeback to the sheep-eating woman. Perfection! :-)

Festivals of all kinds right now are unappealing because it sounds like too many stranger people around me. I better get over it, because I have a crowd function in December.

I love the back to school photo and Oden already looks like he's going to bring all his zeal to this life. Super cute.