Time for an FO Post: "Why Didn't We Go to Woodstock?"

Let me start off by saying that there are too many Patricks our family.  So you may be confused from time to time when I discuss so-and-so and Patrick/Pat, but I try to keep them straight for you.  The particular Patrick in this post is my middle sister's husband, Patrick.  OK now you know.

My brother-in-law Patrick will turn 70 years old this coming October.  He is a truly wonderful and good person, while at the same time, keeping all of us amused on a regular basis.  For instance:  A few years ago, he kept telling his friends, "All of my daughters are on MyFace."  (Mixing up MySpace and Facebook, somewhat clueless about both.)  After which statement, everyone in the family would cry, "STOP telling people that!!!"  His daughters especially find his various comments and behaviors at times amusing and/or embarrassing.

But something that drives my sister absolutely around the bend, is when a song comes on from the 60s, or someone mentions a group/event from the 60s and he always asks the same thing.  For instance, on more than one occasion, we may be talking about The Beatles, and he'll turn to my sister and being 100% serious, will say, "How come we never went to see the Beatles?" and she will respond, "Because they never came to Wheeling, West Virginia!" in the most exasperated tone ever.   It's gotten to the point that all of us, when someone comes on TV who is/was famous will turn to one another and say, "How come we never went to see ______?" and then dissolve into laughter.

when I saw that Must Stash yarn was releasing a "Summer Concert Series" of colorways, and one of them was called "Woodstock," with each stripe representing someone/something related to that festival, I knew that I would buy some and make Patrick a pair of socks for his 70th because, "Why Didn't We Go to Woodstock?"  ;-) 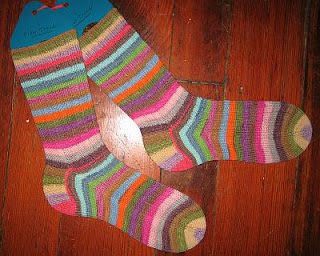 Project:  Peace, Love, and Socks
Pattern:  My go-to vanilla sock pattern, done with a 2 x 2 ribbed cuff and 3 x 1 ribbing down the sock.
Yarn:  The aforementioned Must Stash Self-Striping Sock, in the Woodstock colorway
Needles:  US size 1
Modifications:  Nope
Notes:  These were such fun to knit!  Both because of the stripes and because of Patrick and his many funny things said and done.  And because if there was ever someone knit-worthy, it's him.  This particular pair flew off the needles, not just because I was having such fun knitting them, but also because Must Stash self-striping yarns wind up into two separate balls, meaning you can knit both socks at one time and know they will match.  (I still use dpns, but do one cuff, then the next, one leg, then the next, etc.)  I have never ever been frustrated or disappointed when using Must Stash yarns.

And so, these will make their way to him at some point in October, and I'm sure even though I will explain the whole thing to him, he'll still be puzzled, but then he'll turn to my sister and say, "Why didn't we go to Woodstock?"

And because she is a peace-loving person, he will live to see birthday #71.  :-) 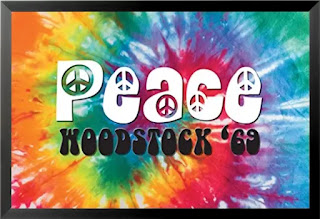 Peace out! Love the socks and I had not heard of Must Stash yarn, so thanks for the link.

Those are awesome socks!

What a great story! And a perfect gift for Patrick! XO

(I didn't go because a) I was a bit too young and b) my mother would have KILLED me before I got two blocks from home.

Love the socks ..... love the idea behind the socks!!! Patrick is going to love them too.

Isn't it funny how certain names just show up in your life with regularity? Among it's my friends, it's the name Eric/k and among family, it's David.

The socks look great! Congrats on finishing them!