Ugh. I am sick, sick, sick.  Nothing life-threatening, just annoying and exhausting.  The Tim had a bit of a cold last week, but it didn't really do much and was gone pretty quickly.  I had some sniffles early in the week, but kept feeling a little bit more icky each day.  A while back, we had planned to be in Baltimore this weekend, but had to cancel those plans due to The Tim's work schedule.  I had decided originally that I would just go ahead and take the Friday and Monday off work as originally planned, and work on some of my own stuff, enjoying an extra long weekend.

So much for those plans.  Thursday I woke up and thought, well, I'm getting that cold.  But Friday when I woke up, WHAM it had hit me!  Sore throat, headache, cough and congestion, the whole thing, soon followed by laryngitis.  I called my dr to ask for some cough syrup, and the good news is that in a very unusual development, she gave me the Good Stuff right away!  But that's really the only good news from the last few days.  I will probably stay home tomorrow as planned, but I am wondering if I should try to tough it out and stay home on Tuesday instead.  They are predicting heavy, all-day rain on Tuesday (left over from Hurricane Florence), and I'm not looking forward to slogging around in that.  Anyway, we'll see.  I'm lucky because a cold is my worst problem, but it is still frustrating.

One of the things I had planned on doing was finishing a pair of socks I'm knitting for one of my sisters.  I am really close, and was hoping to have them completed by today.  But I have neither the energy nor the focus to even knit.  So they will have to wait.  I did have it together yesterday long enough to soak and block a swatch I'd made and immediately forgot about when I couldn't find my blocking mats. 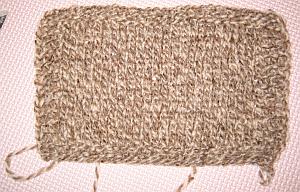 Before going any further, I'm waiting until I can trust my brain cells, but I *think* I have the correct gauge, which would be nice.  It doesn't matter today anyway, since I am still not able to knit without having to tear it out and start over once I'm feeling better.

******
In other news, Hamlet is getting more used to the cats every day.  Not that he was ever aggressive towards them, but you could tell he was perplexed when they would try to rub against him,  or try to cuddle with him.  He just had no idea how to react.  But the other day, he let the Koodle lick his ears, and yesterday he and Jack had a nose-to-nose moment.  Also the other day, he was even brave enough to sleep on his pad, though the Koodle was already there! 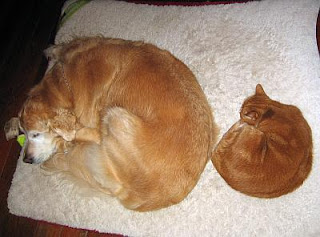 OK, I'm calling it the end now - this has already taken me about 45 minutes to do, and I think I will take my cough syrup and see if I can take a nap.  I hope your weekend has been better than mine!
Posted by Bridget at 8:57 AM
Labels: Hamlet-the-dog, kitties, sick, swatching

I feel you! I woke up in the wee hours of Saturday with my throat on fire! It has subsided into a run of the mill cold, but I don't have much energy.
I love the photo of the dog and cat napping together. So cute. If only people could get along so well!

You're really sick when you don't have the desire, energy, or focus to knit! I hope you feel much better soon, and can nap with the good stuff!

Oh, poor you!!! I hope you feel better soon.

Hope you can kick the bug soon.
Hamlet is doing awesome! We're still working on getting Rupert to accept Relic... and it's been almost a year!

Feel better Bridget, what you have sounds awful. Rest, rest and rest.

Oh, yuck! I hope you are feeling better quickly!!

you're making faster progress than my dog/cat situation. However, Frodo is a high prey dog (schnauzer) and he can't help himself to chase. Holly is a scaredy cat. Sorry you aren't feeling well I hope you feel better soon!!!

I'm so sorry you're not feeling well. (I HATES being sick. Just HATES.) I hope you're feeling better soon. XO (I love to see Hamlet with the kitties! He is such a special dog.)

at a well visit to the doctor last week we were told EVERYONE is sick rightnow. I use hand sanitizer all the time. I hate colds. I prefer to wait in my car instead of a sickly waiting room. The nurse in me rears itss head up often