With All This Time to Think About Knitting ...

As you know - and are likely tired of hearing - I have not been able to knit for months, due to a broken wrist.  For the most part, I've done a lot more reading, but I miss being able to watch a TV show or movie and still work on something.  Or, knit and listen to a podcast or some music.  Hopefully when I visit the surgeon on February 4, she'll say I can start knitting again, but in the meantime, I've done LOTS of thinking about knitting!

So I thought I'd share three of those thoughts with you today, as part of Three on Thursday, with Carole and others. 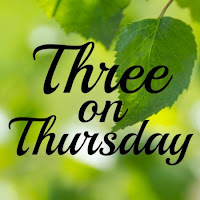 1.  This weekend is Vogue Knitting Live in New York, and it sounds like so many people are planning to go, even if only to peruse the marketplace.  Which sounds like a lot of fun, since like most things, there are special yarn colorways dyed for the event, special project bags and giveaways, etc.  But one of the things I think would be the most fun would be meeting some people I know but really don't, or even just see what they look like in person.  Even in the case of designers or people who do video podcasts, I have a certain idea in my mind of what they are like.  So it's always fun to see if they look the way I think they do/should, and how they sound if you are talking to them one on one.  I remember the first time I got to meet Clara Parkes at a Maryland Sheep and Wool.  She was standing by herself in one of the barns, clearly waiting to meet up with someone.  I introduced myself and though I knew what she looked like from photos, she really did look like that, and she was genuinely what I had expected and hoped she would be.  She didn't know me at all, but was still as friendly as if we had been hanging out together all day.

2. I am liking some of the make-alongs that various podcasters are doing.  A whole (rather large) group is doing a New To You MAL, which I think is a great idea.  The primary requirement is that you try something that you have never done before.  From postings I've seen on Instagram, it looks like a wide variety of things are being included, from the very intricate and involved, to things that are not overly difficult, just new to some people.  I like that it is so inclusive.  And then New England Gal is doing a Finish That Stuff MAL, which is basically for people to work on things that may have been sitting around unfinished for too long.  (I think that nearly every knitter I know would qualify for that one!)  Needless to say, I'm not officially joining either of these (or most likely any others down the road), but I think that these two in particular are good ideas.

3.  Am I the only one who thinks that too many new patterns are coming out these days?  I'm kinda sorta joking, but seriously, it seems that every time you look at Ravelry, or a knit publication, or listen to a podcast, there are at least 50 new patterns a day!  Not that I like them all, or even want to ever knit them, but I'm suddenly feeling the information overload related to it.  Though I guess it's a good problem to have, right??

So there you go, right from my brain to your eyes.  I hope the rest of your day goes well.
Posted by Bridget at 10:32 AM
Labels: three-on-thursday

I was at a fiber festival this past fall & recognized the kids of a blogger that I follow. I thought about saying hi to them but thought about how creepy that would have been for my own kids if some strange woman started babbling at them like they were best friends... and in the end I just pointed them out to the people I was with and kept walking.

Hope you get the knitting go-ahead soon. I can not fathom having my knitting forcibly removed from my life for any time at all. I don't think I'd survive. More power to you!

I've never participated in a make-along, primarily because I don't ever hear about them. And along those lines, whatever happened to swaps?

Every time I have a chance to meet (in real life) a knitter I "know" from BlogLand or the Internet, I have found that they're . . . just like they seem to be on my computer! It's always such a pleasure. I do think knitters are some of the nicest, most welcoming people around. :-) And . . . I couldn't agree more about the avalanche of new patterns coming out every time I open Ravelry. (And most of them are just variations on a theme, y'know?) No wonder we all have knitting-ADD!!! XO

I, too, think it would be fun to go to Vogue Knitting Live! How lovely that you got to meet Clara Parkes and that she was just as you expected. She seems like a lovely lady.

I was approached three times by strangers three different times - one in Nebraska when I was on vacation. All read my blog regularly but didn't comment on any of the posts. It was a bit awkward at first but I was touched that they would take the time to tell me they read my blog.

Though I'd love to get to see all the "goodies" from/at VKL I really have no interest in attending. That's way too many people for me.

I wouldn't mind so many new patterns if they weren't copies of what is already out there.

Really, how many vanilla sock patterns do we really need??? Someone actually posted a new pattern that is exactly the Blueberry Waffle pattern. That's where I think the overload comes from.

Hope the dr. appointment on the 4th goes well.

I would love to go to VKL... that is truly a bucket list item! I hope that you get the all clear to knit and soon!

You are so right. I get sensory overload every time I go to Ravelry anymore. I want to knit ALL THE THINGS. Crazy.

I will pray that feb 4 is your release date of returning to knitting!

Cant wait for you to knit again! I cant get enough new patterns. I Love to chill out and look at them