A week ago today, we had made plans to take Hamlet back to visit the family that he spent most of his life living and working with (the past 7 years or so).  It was the first visit since we adopted him in July, and both persons in the couple had been matched with new Seeing Eye Dogs since.

First, the cast of characters:

We had a lovely day for our visit, so we got Hamlet into the car and headed over the bridge to New Jersey.  When we turned onto the street leading to the house where he used to live, Hamlet got really excited.  When we pulled up in front of the house, he started wagging his tail and whimpering. 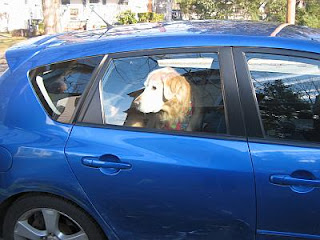 He could not wait to get out of the car, and ran right up to the front door.  Jeff opened the door, and Hamlet dashed inside.  Once inside, Jeff was really excited to see him, but the first thing Hamlet did was run around and gather all of the toys!  Then he realized Jeff was also there, and immediately sat on his lap. 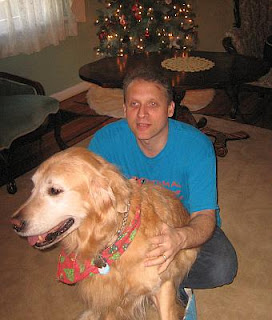 Sharon was upstairs, as they were keeping Mike and Oakley up in their room, so they could introduce them slowly.  First, Mike and Hamlet got to meet. 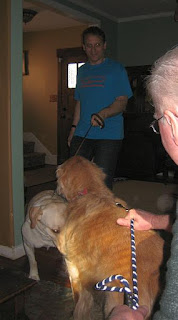 That, of course was very exciting.  Before Sharon and Oakley came downstairs, Karen arrived with Karma, who could NOT wait to see Hamlet again!  (She had already met the other doggos.) 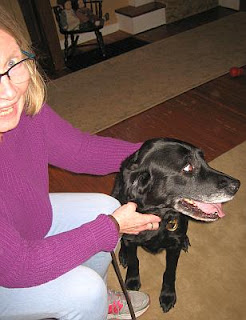 Finally, Sharon and Oakley joined the group, and hilarity ensued! 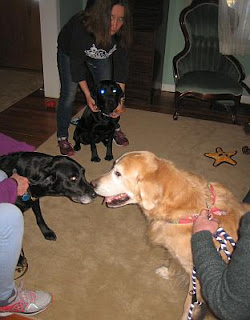 Hamlet was also very happy to see Sharon, and had to go and shake hands with her. 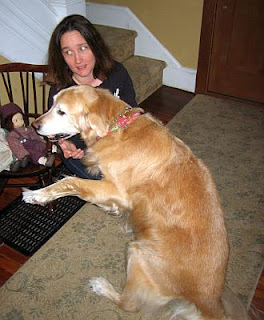 There was a lot of running, chasing, playing, and "fighting," and a couple of times Hamlet disappeared upstairs!  (Jeff said he was probably checking to make sure everything was where he had left it, lol.) 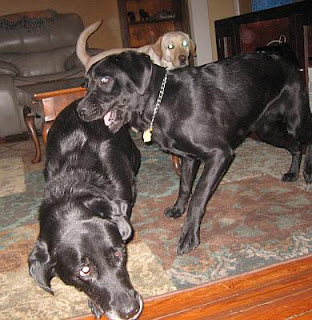 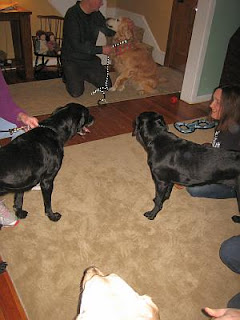 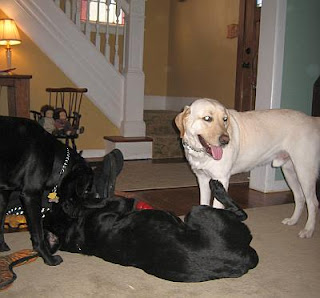 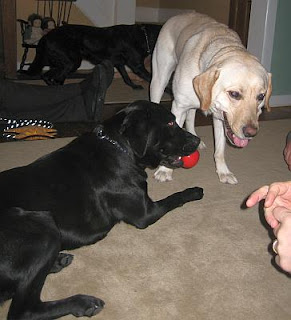 After a bit, things settled down, with all of the dogs getting quieter, and eventually all of them lined up and nearly asleep! 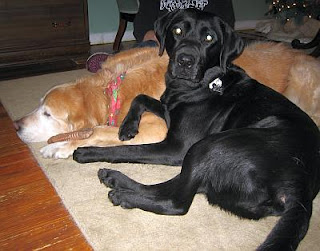 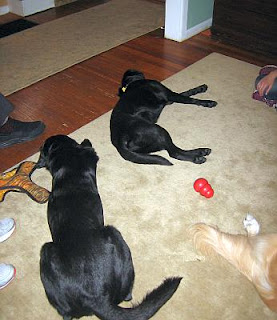 Hamlet made sure that he got lots of cuddle time with Jeff, supervised of course by Mike. 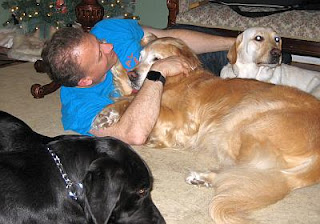 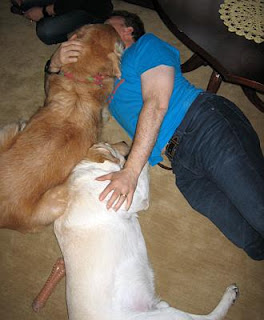 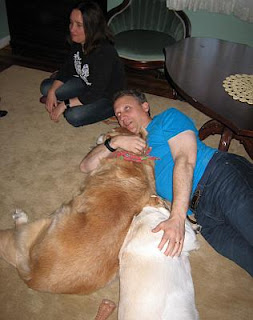 It was all really fun and really wonderful.  It was fun to see Sharon and Jeff, and meet Karen, who we had never met before.  We loved seeing Karma again, as she is just one of the sweetest pups, and a fan in particular of The Tim.  And getting to meet Oakley and Mike was such fun as well, as they are still somewhat puppy-ish (they are each about 2 years old), and busy as only young dogs can be.  We caught up with everyone's news and stories of their Christmas celebrations, and it was just enjoyable to know that all of the dogs had not just had a good time, but worn each other out!  We were all amused that Jeff's dog is named Mike, and decided he sounded like he was from South Philly, and that he "knows a guy" ... :-)

When it came time to leave, we were wondering what Hamlet would do.  In July, when we went to bring him home, he hid behind Jeff and whimpered, which was heartbreaking.  But when everyone was getting ready, Hamlet walked over to The Tim when he got out his leash, and seemed ready to leave, get back in the car, and come home.  Jeff said that means he has completely bonded with us, which of course is the ideal result.  Hamlet was pretty zonked on the ride home, and let me tell you, the excitement and fun of the whole day wore him out for a few days!

The cats found it interesting as well, since Hamlet returned home with many new and intriguing scents on him - they probably were wondering just where we'd taken him!

We made tentative plans for another get together in the spring, this time hopefully outside.  We told Hamlet he'd better start storing some energy now ...
Posted by Bridget at 8:22 AM
Labels: Christmastime, dogs, Hamlet

This is such a great story! Thanks for sharing it with us. (P.S. I think Hamlet is the handsomest of all the dogs.)

What a great story Bridget, I am so glad everyone was happy to see each other and that Hamlet was happy to come home when all the festivities were over.

This post made me so happy. I was worried about how it would 'end' and if Hamlet would want to stay---so happy he was ready to go HOME. And this story clearly shows that dogs have deep memories and attachments. Love this story.

Awwww.....that is just the sweetest story. I am so glad he's happy in his new home.

What a nice treat for Hamlet. Glad all went well and he wasn't too "homesick".

What a lucky dog!

Sounds like a fun day. Must have been nice to learn that Hamlet is now bonded with the two of you, and truly your dog!

Great story. Love that hamlet remembered them but was ready to go home with you

ack! I got emotional reading your story, what fun and so heartwarming!! I love that Hamlet is bonded to you all :)

Oh, Bridget! I have the spine-tingles and tears in my eyes. This post just brings so much HAPPY! I would have loved to be there -- to watch all the dog-joy and feel all the feels. Thanks so much for sharing this Most Wonderful story. What lucky, lucky dogs . . . XOXOXOXO

My eyes are brimming with tears as I read this beautiful story! What an amazing visit! Truly, what blessed doggies! Thank you for sharing!