Before saying anything else, I think you should know that I am highly irritated with The Tim, who has given me his cold.  As if I wanted or needed it!  And I can't just get a cold - no, I have to get a cough that makes me feel like I'm losing a lung every time as well.  I think it's just rude.  Particularly with a holiday weekend coming up.

Today is Tiny Needle Tuesday, when Dee and some others show their needlework projects.  I showed a counted cross-stitch that I was working on right when I first started it, but not since then, because though I knew I had made progress, it wasn't easy for anyone else to tell.  But I have made some significant progress AND I wanted to show off my new project bag, purchased here.

One thing I really love about it is that there is a window in the front where you can get a peek of the project - however, trying to illustrate that in a photograph is, as you can see below, difficult at best. 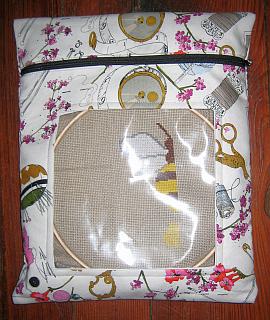 So instead, here is the project on top of the bag - I have finished half of the honeybee's body, and got a start on one of the surrounding honey cones. 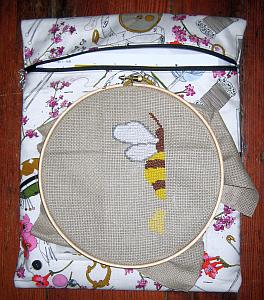 As it's turning out, I've really only been working on this on Saturdays, so progress is slower than if I put it in rotation with my knitting projects.  But I'm not on a deadline, so I'm just gonna work on it when I feel like it, and if that is only on Saturdays, no big deal.

I won't be making progress on it this Saturday, since we will be in West Virginia for Memorial Day weekend, and whenever we go there, I only take one project along, and one that is not terribly involved at that.  Between the visiting and everything else, there's not a lot of time to concentrate heavily on a pattern or anything like that.

I've very pleased with my honeybee so far, and yes, I've made lots of mistakes, but as long as it looks like a good approximation of what the pattern image looks like, I'll be fine with that.

Are you working on any non-knitting projects?
Posted by Bridget at 7:59 AM
Labels: Tiny-Needle-Tuesday

What is it about bees? They always look so charming in any medium, and even in real life, as long as they aren't about to sting.

I'm only knitting, and slowly at that. Any other projects are horrid things like Vacuuming, Laundry, and the Worst Project Of All--What Should We Have For Dinner? Sigh.

I can see the bee and the progress! Hope you feel better; tell Tim to keep his viruses to himself in the future.

That project bag is great.

I'd say your honey bee looks like a honey bee. So, all is GOOD!

Have a great time in West Virginia. Hoping the weather there is as good as it is supposed to be HERE!

I love the little bee! What a cute stitching project -- and a very cool bag, too. I hope you feel much better before your weekend away. (It's bad enough to be sick, but when it's sick + bad timing, it seems particularly unfair.) Gardening pretty much takes over any kind of stitching/knitting/making projects for me. At least in May! ;-)

Ugh... Dave always gives me his colds and I always end up worse than he was (thank you asthma)

I didn't get any stitching done this week. In fact, I haven't done any at all in the month of May.
Feel better!

Oh my! I love your HoneyBee start! I have had stitching on the brain recently and have fallen down a lovely little rabbit hole on IG of the Long Dog Samplers. But thinking and actually doing are two different things and I am not sure my eyes can handle that tiny work.

the bee screams summer to me! Lovely starts and I hope you are having a fabulous weekend!