This Friday Is Brought to You by an FO 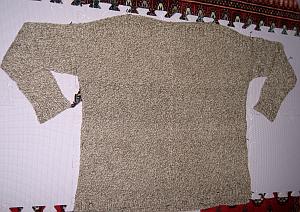 Here it is, blocking away!

Project:  Neverender
Pattern:  The Weekender, by Andrea Mowry
Size made:  34
Yarn:  Brooklyn Tweed Shelter, in the Caribou colorway (6.5 skeins)
Needles:  US size 7, 8, 9
Modifications:  When you are finishing the neckline and the sleeve cuffs, you are doing 1 x 1 ribbing.  To bind off, the pattern has you put the purl stitches on one needle and the knit stitches on the other, and do the kitchener stitch to bind off.  I followed it for the neckline, because I wasn't really sure what was going on until after I finished it.  It was awkward, and I think another bind off that would be more straightforward would be fine and look better (my kitchener is OK but not perfect).  So when I got to the sleeve bind off, I just did a tubular bindoff which was much easier and looks just fine, in my opinion.
Notes: This has been a really popular pattern on Ravelry since it first came out (as of this post, there are 4405 projects listed).  I was not lured into it until I actually saw one of the women who works at Loop wearing the one she had knit.  I liked it so much better than any of the photos I'd seen, so I decided to make one for myself.  I also had a store credit, so I decided to purchase the yarn used in the original pattern (which I am seldom able to afford to do).  I'm happy with the final product, but I just felt that this was a knitting project that would never end.

The pattern is fairly straightforward, and easy to follow.  The construction is different, at least from anything else I've knit (granted, I'm a fairly new sweater knitter), but the instructions told you exactly what you needed to do and when.

I made a size 34, because I figured it would be the size that would work best for me once it was finished.   The pattern states that it is intended to be worn with 10 inches of postive ease, and I did not want my size regular size with an extra 10 inches - I don't like overly large things, and there was no one I wanted to ask to join me in it when I wore it.  I'm really pleased with my final product - it has room for wearing with a layer underneath, but it's not crazy oversized.

The yarn was for me the worst part.  I did not enjoy knitting with it at all.  I am the only person I know now who is not in love with Brooklyn Tweed Shelter, so keep in mind that if you ever give it a try, it may turn out to be your favorite yarn ever.  I found it kind of scratchy and just didn't like the way it was to knit.  Who knows, maybe if I had used a different yarn, I would have enjoyed the whole process of knitting it more.  But I powered through, and I do have to say that when I soaked it and blocked it, the yarn ended up feeling very soft (which is good if I'm gonna wear it). 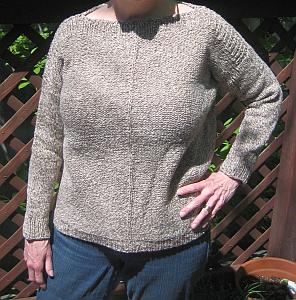 This photo gives you an idea of how it fits me.  And of course, there is a story behind this photo.  Last Saturday was sunny, cool, and REALLY WINDY here.  I had asked The Tim if he would take a finished product photo of me wearing it, and he said that was fine.  So on Saturday, he suggested we take some photos out on our deck.  As I said, it was very windy, and stuff was flying everywhere.  In every single photo, my eyes are either closed, my hair is straight up, or something has flown in front of my face (a leaf once, a plastic bag another time, for instance).  The photo above is the best of the lot, even though it's not.  At one point, a branch from the neighbors' tree bonked me in the head.  So in this photo, my hair is being blown around AND my glasses are in the process of being knocked off my face.  After the "photo shoot," The Tim said they had turned out really well.  When I saw them, I asked how he thought they were so great, when I was either standing with my eyes closed, or in this case, had my glasses heading off my face.  He responded, "I was taking photos of the sweater, not of you."

So there you have it.  This was the best photo of the sweater.  You'll have to take my word for it that I'm the one wearing it ...

You are not the only one who does not love Shelter yarn. I have six skeins of it for sale on Ravelry if anyone wants some. I bought it for a class I took and did not enjoy working with it. At all.

Your sweater looks comfy and nice and I hope you enjoy wearing it. And I'm glad it's finally Finished!

Despite your feelings about the yarn, it looks lovely. The sweater came out beautifully, and the fit looks perfect. Is it the light, or has the yarn sort of a velour-type finish? It appears quite soft and cuddly.

The sweater looks GREAT on you (I'll take your word for it . . . that that IS you!). I hope you find it's worth all the neverevending trouble. I actually love Shelter . . . BUT I was terribly disappointed with it the first time I used it (especially after the $ investment). I don't like knitting with it, but I really love the way it behaves over time. It's light but warm, softens with wear and soaking, doesn't stretch out, and holds up well. But it's not so pleasureable to knit with, I'll admit. I hope you enjoy wearing the sweater for years to come. XO

I'm glad your Neverender is done, and it looks like a really lovely sweater in the photo you risked wind injury to show us. The lengths you artistes will go to for your art!

Congrats on the big finish!!! It looks so nice and cozy.

I recognize those hands!!! It's YOU!

The sweater is gorgeous. (You are FAR from the only person that does not like Brooklyn Tweed's Shelter. There are a lot of podcasters that love the look of the yarn, but not the actual knitting of the yarn.)

It looks great! I don't think I've ever knit with that because of the cost. I've knit with one type of Brooklyn Tweed that I bought in bits and pieces from people destashing.

Don't you just love a man with a sense of humour!!!! Looks lovely by the way.

I think it looks just lovely! But I'll take your yarn warning. That can ruin a project for me fast!

OMG! Tim sounds just like Dave. I never ask him to take my picture any more because he always seems to find the MOST unflattering angle possible.

Nice work on the sweater!

Oh, great job, you! It looks very comfy & that all the neverending knitting has resulted in a sweater you'll wear all the time. Congrats!

Love the sweater! It looks great on you and I'm off to see if the pattern is already on my Ravelry queue.

it fits perfectly!! I bet you are loving having the knitting getting gone once more.