FO Post: A Happy Knit and a Happy Gift!

I promised you an FO post this week, and here you go.  Especially since not only is this project finished, but the recipient has opened the package and seems to be really happy with them, which of course is what every knitter hopes when making something for someone else! 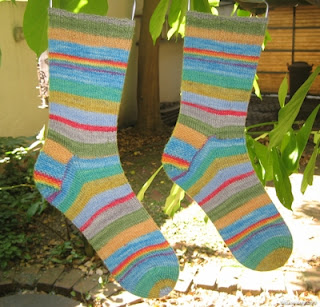 Project:  Robin's Rainbow Socks
Pattern:  Plain Vanilla Sock pattern, based on this one, which is my go-to pattern
Needles:  US size 0, 9-inch circulars
Yarn:  Must Stash Yarn & Fiber Must Match, in the Over the Rainbow colorway
Notes:  These socks were made for Robin, the woman who raised Hamlet as a puppy, introduced and talked about here.  After our meetup, Hamlet wanted to do something special for Robin, and so did I.  He suggested that I knit something for her, and I thought that was a good idea.  I considered a hat, or scarf, or fingerless gloves, but I had noticed when we met that she was wearing some colorful socks, and well ... you know me!  So I went stash diving, and found this yarn that I had bought a few years back.  It seemed so happy, that I decided it would be perfect.
And the rest is just as you imagine.  I sent her an e-mail, asking her shoe size with no explanation, and to her credit, she happily provided the info.  I knit the socks, and enjoyed every minute - not just because I was excited to be making them for someone, but the colors were so bright and happy, and it was such fun to see what was next.
Inevitably, when I make socks, if I'm going to mess up anywhere, it's on the toe.  And this pair was no exception.  On the second sock, I mangled things when kitchener-ing at the end.  So I had to cut the yarn and unravel, and then do it again.  Not a big deal, but it is why the one sock has a completely yellow toe area.  I'm not sure why I mess up the toes, except possibly that I am so overconfident because it's the last thing, that I fail to pay as close attention as I should.
Anyway, I took them to the post office to mail to her (she lives in southern New Jersey, across the Delaware River) on Monday, and they said they would arrive on Thursday.  Which was longer than usual, but not a problem, since she didn't know they were coming.  Then last night I got a really excited e-mail from her, saying they arrived, they fit, and that she loves them!  She said in the note, "You have no way of knowing this, but I have a thing for socks!"
Dear Robin:  So do I. 😊 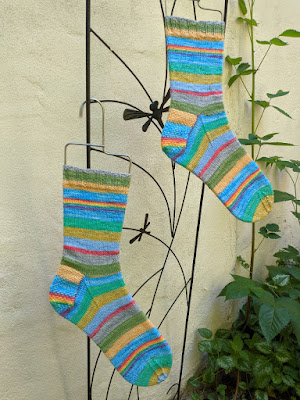 What a PERFECTly thoughtful gift for Robin! Fun. Colorful. HAPPY socks! (What could be better?) XO

Well done! We always forget that we take for granted the magic that happens when you make socks from a ball of yarn. Ordinary folks are in awe of our power! They never even notice the things that give us grief.

what a wonderful pair of socks! so cheery!

Im always so excited to finish that I mess up on the toe too!!! Or any last part of a project.
Yours socks are beautiful

They look awesome! Even someone without a thing for socks would love getting those in the mail!

I love that she loves socks! I'm sure these will be very special to her.

I love them! I do not have a Thing For Socks, and I'd be beyond happy to get them as a gift. You and Hamlet were right on with this present.

a most beautiful pair of socks!

Beautiful, and a very thoughtful gift!