This morning I finally managed to get the pictures of my purchases from Maryland Sheep & Wool last Saturday out of my camera so I could show you what goodies I found. This year, I didn't actually buy too much, partly because I hadn't set aside as much money to take with me, and partly because I didn't want to buy something just for the sake of buying it.

Which is not to say I had a plan, like Wendy, who actually gave it some thought beforehand. In theory, I would like to do that, especially so I could buy enough yarn for a specific project. But the reality is that I am not that organized about these things.

Last fall, when I went to Stitches East, I realized when I got home, that all of the yarn I bought was some version of a pumpkin or rust shade. When I got home last Saturday, and was showing my treasures to The Tim (who as you can imagine was riveted), I realized that I had apparently been on a green kick, as evidenced below.

On the left are two skeins of Brooks Farm Fourplay. I have seen a couple of sweaters that the aforementioned Wendy made with this yarn, and they were beautiful. So I made it a point to take a look at their booth. This colorway just particularly appealed to me.

The picture on the right is two skeins of Soft Touch Lace from Shelridge Farm, in a shade called Pistachio. I love the color, it reminds me of a lighter shade of celadon green, and the yarn is so cushy. On top of which, the price was right! I was also pleased because Shelridge Farm is a company in Canada (or as we call it, Canadia), and I do love Canada!

I am hoping to use the Soft Touch Lace for the pattern I bought at The Mannings booth, the Lace Leaf Shawl by Evelyn Clark.

Ever since Ann posted a picture of the shawl she knit months ago, I have wanted to try this pattern. I have no idea when I'll actually get to it, but I have the pattern and the yarn, once all of my gift knitting is finished. (And once get the hang of lace by finishing another shawl that is a little more than halfway done, and languishing at the moment ...)

The last thing I'm showing you was a present for the kitties. I thought they deserved something from my trip, and at the price of one dollar, this fit the bill perfectly. 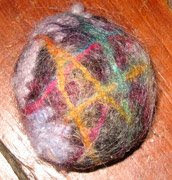 Much hilarity has ensued at our house, thanks to the felted yarn ball above. Well worth the cost, that's for sure!

The Lace Leaf Shawl is fun to knit and will look stunning in the yarn you selected.

Shelridge Farms are a great company, and their yarn is wonderful to work with. Yay Canadia! :D

Hehe, Canadia. I'm going to steal that. Lucky duck - looks like a good set of acquisitions. I need to get Riley a smaller felted ball, as the one he has is a little too big for him to really play with.

Well. I certainly found it riviting and I'm sure Tim did too!!! Wonderful choices. I have wondered about the Brooks Farm 4play. I will be interested how you like knitting with it. You are so lucky to have the chance to attend in person and see all the vendors first hand. Good choice on a shawl pattern. I think that yarn and color were a great choice.

The shawl is going to be really pretty! That yarn ball looks like fun.

Glad to have been some inspiration! I wear my shawl quite often (and I'm not really a shawl person!). It will look gorgeous in the pistachio.