Here it is, a nice and sunny Saturday, after a dreary, gray, and cold day yesterday. I have already gone for a nice long walk, and stopped at the bakery to get some goodies for later. On days like this, I really enjoy getting out early in the morning when everything seems bright and fresh. The fact that it is also Saturday is just the icing on the cake.

If you have been paying attention, you know that we are now up to the letter J in the ABC-along 2008. So you probably saw this one coming ...

J is for Jetsam! 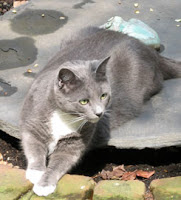 Here he is a few weeks ago, when he was "helping" me plant some flowers in the garden. Jetsam is now two years old, and he is still having as much fun as he ever did as a tiny kitten. One of his current favorite activities is to burrow under the rugs to the middle of the room, where he will sit for an hour or so before coming out. Whenever anyone walks by, you hear a little "Merp!" sound, and can see a paw under the rug trying to grab your foot.

As you may have guessed, we spend a lot of time straightening out the rugs here ...

The story of how Jetsam joined our family is here, if you are interested. I can say that he is still a sweetie, a troublemaker, and the ultimate optimist, in that it is still impossible to even come close to hurting his feelings! He is apparently of the belief that any attention is good attention ...

Here are a couple of pictures, taken recently when we were sitting out on our deck, and he was dying to join us - but because he would easily be The Cat Most Likely To Jump Off theDeck, he was forced to stay inside - the indignity of it all!

Left: "This poor little kitten would love to come out and sit with you."

Right: "OK, a breakout is the only possibility!"

I have made more progress on Dotty:

I'm very nearly at the point where I will need to get ready to create steeks for the armholes and V-neck. This makes me nervous, as it never occurred to me that I would be doing steeks - I thought it would be one of those divide-at-the-armholes-and-continue projects . Lisa (our instructor) assures me that it will be fine, but what if my poor brain is so full of fair-isle, there's no room for steeks??

I am also happy to report that I have finished another secret Christmas gift project, and have gotten halfway on another! As you know, I can't show you the pictures here, because I want them to stay a surprise to the recipients, so you'll have to wait until December, when they have been gifted, and once that's done, I'll have all kinds of pictures for you.

In the meantime, if you are on Ravelry, you can see the finished project in my notebook.

That's it for now, time to do more Saturday stuff!

eek! Steeks! It makes me nervous just to read about it ...

I love hearing about Jetsam! I am a cat-lover currently living with a dog (whom I love). I am looking forward to the day when I'll have a cat in my life again.

Oh, it sounds like you are having such a nice Saturday. Goodies to look foward too - how nice!

The pictures of Jetsam are hysterical - he looks like the cat from one of the Beatrix Potter stories.

PS the gifty recipient will be very happy.

Great to see you gave Jetsam your J posting.

Hope the rest of the sunny Saturday was as enjoyable.

J is for Jetsam is right! What a great guy he looks to be. I showed my Percy the pictures of Jetsam stuck in the house as the next few months are Percy's prison time, but he refused to look.

Dottie is looking marvelous. Please keep posting us of progress.

Jetsam is quite the character! I love the kitty breakout picture. :)

The thought of taking scissors to knitting makes me hyperventilate. But I am weak. I watched "Wife vs. Secretary" this weekend. Hurray Myrna Loy! Off to Ravelry to see what you've been up to.

Steeks are easy. So I hear.

Jetsam is so cute! I can't believe some *dolt dumped him like that.