It occurs to me from looking at other peoples' blogs, that the pictures they post from the Maryland Sheep & Wool Festival include some animals, some vendors, and mostly people they saw/met/knocked down.

Sorry - you won't find that here. I realized when I was uploading the photos, that they were all of animals (except where the farmer shows up in the photo from the sheep herding exhibition). But to be perfectly honest, I go mainly to see the animals, then to see the vendors, and usually only see people I know on the bus. Last year I did go to the bloggers meet-up, and met some new people, which was lots of fun. This year, I didn't know where or when that was, or if they were even having it, since there was also a Ravelry meet-up. (Which I didn't attend, because I figured it would be uber-crowded, and I had plenty of other chances during the day to be in a large crowd ...)

So without further ado, here are my pictures - well, those that turned out - from yesterday.

First up, the alpacas: 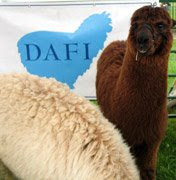 I always love seeing the alpacas, they always look so content, and are usually pretty friendly, when they can tear themselves away from eating. 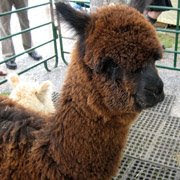 This guy was ready for his closeup!

Next were the goats, who were quite pleased with the attention they were receiving, since most of the little kids were pulling up grass and feeding it to them:

Then we headed to the sheep herding exhibition, which is always one of my favorite things. I am always impressed by the focus of the Border Collies, and the communication between the dogs and the farmer, and the dogs and the sheep. Plus, it amuses me to watch the sheep, who sometimes look as if they are working on a new plan to outsmart the dog ...

These three were sure they had foiled the dog's plans.

Then the farmer stepped in for a moment 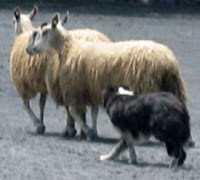 But of course, in the end, the dog prevailed. (This is blurry, since it is an "action" shot. For once it's not completely due to my poor photography skills!)

We took one last walk through the barns before heading back to the bus. I liked this sheep family, but was really worried that the one on the left was going to wake up with a really stiff neck!

There were a lot of friendly animals this year, who would allow you to pet them, so I had an especially good time. I was with my friend Amanda (not to be confused with my niece Amanda), who is also a true animal lover, and I think that made it even better, since I never felt like I was keeping her from doing things she wanted to do, and - I hope - the feeling was mutual on her part!
Posted by Bridget at 6:52 PM

That's just the best way to go with someone! Cute critters.

You took some nice pictures! It's interesting to see the alpacas - I'm currently knitting with Blue Sky Alpaca Royal and it's really heavenly and soft. I'm already planning what else I can use it for!

I can't believe I missed you! ):
Great animal pix!
xoxo

The shot of the three sheep looks great! I wish my sheep-herding photos come out as well.

And I did have a great time. I just wish I could have found space for a couple of the goats on the bus...

Aw, don't you just want to hug the alpacas??! I would just love seeing the animals too. I would have snagged one of the baby sheep.

Glad you had a good time!

that dog looks like a total pimp. i'll have to email your the dialogue i just made up for that picture. ;)

Nice pictures. That's definitely what I would spend my time looking at too. Well, maybe not the BCs herding as I watch them beating my Pems enough at herding events :)

They certainly were bred for sheep weren't there?

Love the animals- alpacas are great, aren't they?

I could watch the herding dogs all day.