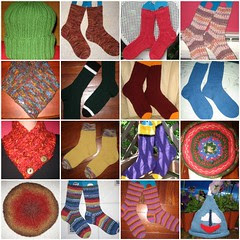 OK, right now I'm just a little bit too pleased with myself. First of all, I created this collage/mosaic of the knitting I completed during 2008. Then, I figured out how to get it to load directly from Flickr. Am I a techno-wonder or what???

Seriously, though, I am surprised at myself for having completed sixteen projects during the past year! I'm pretty sure that I haven't even come close to half that number before. Granted, ten of the projects were my Christmas gift socks, but still ... I'm happy that I did it.

And, given that these kind of things please me inordinately, how cool is it that it turns out into a nice even amount for the grid of photos??

I have been busy thinking about what I want to do next, how to rearrange things here in the craft room/office (more on that later). I do think that there are a few UFOs (for the non-knitters, UFO = UnFinished Object) that will be frogged (again, frogged equals taken off the needles and rolled back into a ball of yarn - as in, "rip it, rip it" - hey I don't make these things up). I can think of two right off the bat that just need a new life and identity.

I have to say that for the most part, 2008 was a good year for me. Sure, there were some things I would have skipped, given the choice, but overall, things went well, and I feel like next year can only be better. Regardless of how I feel, I'm always a little sad to see the year end - I guess it's the "official" passage of time that gets to me. But doesn't everyone always want the next year to be better?

The Tim and I will be celebrating as usual, going out to a Thai place for dinner (relatively early, since we aren't into being around drunken crowds of strangers), then some champagne, shrimp, and Holiday Cheeseball around midnight, while we watch the ball drop. It's just us and the kitties, and I think it's a fine way to end one year and begin another.

On that note, I will sign off for 2008. Thanks to all of my blogging friends, you have definitely been one of the best things about the year! Here's hoping that 2009 will be good to all of us, and that we'll continue our friendships.

Be well, and happy knitting!

Best wishes for you in the new year!

the cheese ball was beyond delish...it was cigarette/moist towelette worthy :)

Congratulations on all the completions!

For a split-second there, I imagined you were going to drop the cheeseball --- in some sort of odd Pennsylvanian ritual.

Happiness always to you and The Tim.

16 FO's is impressive. You are a techno/knitting marvel.