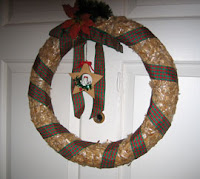 Today's Christmas decoration is the wreath that hangs on the inside of one of our front doors (we have two front doors, as our house was originally two houses on different blocks. It's a long story. I'll tell you some day). Anyway, this may not look all that amazing to you, but this was one of the first decorations from the first Christmas (lo those many years ago) that The Tim and I were married. We visited a local crafts store and bought the materials, and then created this masterpiece ourselves. It hung on the door of our apartment in married student housing at Notre Dame.
Being that it was thirty years ago, and we likely spent about $5.99 for materials, not a bad investment, huh?
A belated thank-you
I just realized the other day that a couple of months ago (!), Maureen gave me this award:

Not only did I forget to thank her, I forgot to post about it! Apologies, Maureen, I didn't mean to seem like such an ingrate. Maureen and I "met" about two years ago, in a holiday swap, and have been friends ever since. She lives in Canadia, and you all know how I do love Canadia, so it seems like we would have to have gotten along, right?

She has lots of blog friends, so I was especially touched that she included me on her list of blogs for this award. Thank you so much!

At this point, so many others have posted about receiving this award, my brain is not currently in a state to ponder those who haven't. Forgive me for being too mush-brained at the moment to pass it along to anyone else.

Earlier in the fall, I signed up for Back-Tack 4, a swap with a holiday theme. You may remember the neck warmer I made for Kaitlyn, my swap partner. She sent me a wonderful package, and I forgot to post about it until now.

Beautiful, no? She knit me the most amazingly cushy, cheery scarf, and then a drawstring bag to go with it! (She's a relatively new knitter, too - amazing!) The three items in the small white tubes in the front are homemade lip balms - one peppermint and two honey vanilla. They are incredible, and just the right amount of scent/flavor. And did you notice the pretty and sparkly gold drawstring on the bag - how Christmas-y is that? Also received (but not in the picture, 'cause I just couldn't get it to photograph decently) was a small, aquamarine flip-flop charm for a necklace or bracelet! It's really cute, and quite sparkly. (And you know I love sparkly, right?) Turns out that Kaitlyn and I have the same birthday (though I am approximately 152 years older than she is), so when she saw the charm, she thought it would be just right to include in the swap package.

Thanks, Kaitlyn - the fact that you not only knit things for me, but also made the lip balm makes the whole thing that much more special.

Now that a few of my secret Christmas knitting projects have been gifted, I can actually show them to you, and you don't have to be on Ravelry to see them.

I made another Herringbone Neck Warmer, this time for Karen (Seb's mom):

I couldn't get a photo that showed the buttons well, but they are silver buttons in the shape of a vintage high heel - perfect for Karen! This was knit last week, when I decided that I could get it finished in time to give her this past Saturday, when we got together to decorate their tree. She seemed really thrilled with it, and wore it the entire time we were at their house.

I have to thank Eileen for the buttons - she has a button stash that is actually varied (not just extra blouse buttons like mine), since she does a lot of sewing. She actually brought a selection for me to choose from, and we both agreed that these fit the bill. (By the way, she's having a holiday contest on her blog - you might want to check it out.)

I think I'm caught up on things now, so I'll save some of the other things for future posts. Though I would like to point out to Kim that I have a toothache - does that make you feel better???*

*Kim expressed her dismay in the comments of the previous post - I'm just trying to cheer her up ...

Thanks for visiting my blog. You've been busy! Loved the post from Tess. I hope Tess and Percy never get together, they would take over our worlds :)

Fame is doing well. Still crossing my fingers and saying my prayers.

It can't seem to get above zero here nor stop snowing. Argh!

Bridget- I'd say the wreath doesn't owe you a thing- but do tell us more about the house.

... draws chair closer and leans in for story about two houses becoming one ...

That bag was from a "new" knitter! Wow - what will she be making in a few years - LOL

You never mentioned living in a mansion before. Do you have a butler? I'm so intrigued.

Yes, I do feel better. The Wreath Story warmed my heart.

I want to hear the two-houses-become-one story too. Lovely wreath. Well worth the investment.

I love your swap package! Sweet!

Cute neckwarmer you made.

I live in fear I'll be nominated for an award, I'm awful about responding but congratulations, yours is indeed a brilliante blog.