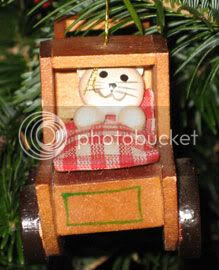 Baby Molly ornament
Well, it's been a busy few days around here! We had company coming yesterday, so I wanted to get some things done, as well as at least get started on my baking. (The Tim has been a baking fool already - he's made about four different things. Show off!)
(But, before we start, isn't that a sweet ornament at the top of this post? We bought that for our tree the first year we lived in DC, which was also the first year we had our cat Molly. I think I got it at a drugstore for something like $1.50 - no planned obsolescence there!)

Now, back to being so busy. Friday, I decided that I was going to start some of my baking. 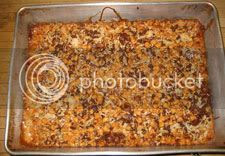 I really love Seven Layer Cookies, and since I had the ingredients, I figured that was as good a place as any to begin. They turned out well, and were not even has hard to get out of the pan as they usually are.
And then, since we were going to all be heading to Karen and Seb's house on Saturday, to help them decorate their Christmas tree, I wanted to make something to take along. I had seen a recipe for this a few days ago, and wanted to try it. It was a big hit - there was not a speck left at the end of the day: 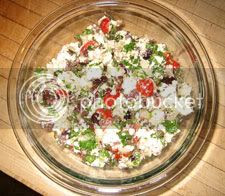 Feta Salsa
It really is yummy, as well as easy to make. I used grape tomatoes, instead of the sundried ones called for in the recipe, and also added rinsed capers. The next time I make it, I will also rinse the olives first, 'cause it was just slightly too salty for my preference. But I will definitely make it again! If you want to give it a try, the recipe is here.
And that's it for now. I have lots of other stuff - food, knitting, people, decorations - to share, but right now, it's off to feed the kitties as well as myself!
Eleven days
left until
CHRISTMAS!!!
Posted by Bridget at 5:14 PM

I love Seven Layer cookies too - and I haven't had them in a long time. Maybe its time to make them!

I alwasy love pulling out beloved ornaments from years gone by ~ that's a cute one!

Your 7 layer cookies look positively decadent - as everything involving condenses milk is!

Bridget- Love the kitty ornament, and all the food. I wish I had a guy who baked.

Okay, just stop it. Stop it with the cuteness and the cookies and the feta cheese. Some of us are trying to muddle through our own gray lives. . . .

Feed the kitties. Tuppence a day?