You may recall that I signed up for the Well-Seasoned Reader Challenge, which runs from January 1 until March 31. I finished one book so far, Five Quarters of the Orange, by Joanne Harris.

Harris, as you may or may not recall, also wrote Chocolat, so I was intrigued to see where this book would take me. The story/stories take place in a village in the Loire Valley of France called Les Laveuses, and is told by the youngest daughter in a family, Framboise Dartigen. It begins with Framboise telling of the scrapbook she received as her legacy when her mother died. The scrapbook is a mix of photos, recipes, random comments, and other things her mother felt the urge to write. It is not in any particular type of order, and is written in a language that Framboise is able to "translate," though at first she finds it nonsensical.

The story is told as a combination of flashbacks and the present day, when Framboise has returned to her family village - to the farmhouse where they lived - as a grown widow, but under another name. The background of the story is the tale of her family - herself, her difficult mother, and her brother and sister - during the time of the German occupation of France in World War II.

The story of the family and their relationship to the others in the village, and the German soldiers who were part of the occupying force, made the book an interesting read - I kept wanting to read more to find out what would/did happen. And the characters of Framboise and her mother were the most interesting to me, though neither of them were particularly appealing or sympathetic. I found the writing style to be very evocative of time and place (though admittedly I've never been to the Loire Valley), and using Framboise's voice to tell the story made sense to me.

So though I liked a lot about the book, I didn't really like the characters, and found the lack of regret or remorse about their actions during the war to be disturbing. It's not so much that I wanted a happy ending, or a lot of wringing of the hands about "Oh how could I have done so-and-so," etc. Rather, I would have just liked it if Framboise would have acknowledged the fact that so many of the unfortunate things that happened to others in their village were a result of acts by her family. It seems to me that she never does, and though to some extent I cannot blame her - no one likes to dwell on unpleasantness - it made it difficult for me to feel any empathy for her situation later in the book.

In a nutshell, it was a good read, but not as satisfying as I had hoped. Having said that, if anyone would like to read it, my copy is an old Advance Reader's Edition, and I'd be happy to pass it along. If you are interested, let me know either via e-mail or in the comments. If more than one person is interested, I'll devise a way to draw a name that will give everyone an equal chance.

On to the two FOs mentioned in the title ~

Sebastian's birthday was in mid-January (how is it that he is 15 years old now?), and I wanted to knit him something. The Tim suggested a hat, which seemed like a pretty good idea, since I knew I could finish it between the beginning of the month and when we would see him (or thought we would see him) around the time of his birthday. He's on the wrestling team this year, so I decided to make him a hat using his school's colors, blue and gold. I made the "beanie" version of the House Hats pattern in the book Charmed Knits; I call this Seb's School Colors Hat. 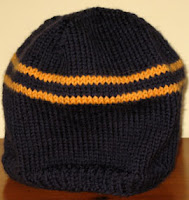 I used Mission Falls 1824 Wool, and then some leftover Encore for the gold stripes, and the resulting hat is soft and cozy-feeling. (And for convenience, machine washable to boot!) As it turns out, we didn't get to give it to him until this past Friday, so I've been sitting on this one for a while! It fit him, and he seemed to like it. To his credit, he wore it on his head from the time he opened it, until we left. (That's one of the best things about Sebastian, by the way - he shows appreciation in a genuine fashion, without making a big deal of it.)

Seb's mom Karen will be celebrating her birthday at the end of February, so I also knit something to give to her. And since it took so long for us to see Seb for his birthday celebration, we took Karen's gifts along on Friday as well, and she opened them. Which means I can show you another FO - Karen's Birthday Mitts: 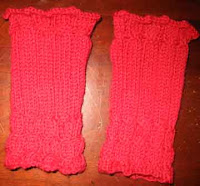 I used the Fetching pattern, and Cascade 220 for these. My lousy photography skills notwithstanding, they turned out well, and fit her just perfectly. I have a pair that I made for myself, and I wear them a lot during the winter, and since Karen is often saying she is cold, I decided she could use a pair as well.

There's another completed project waiting for its blog debut, but that will have to wait a few days, until I'm sure the recipient has received it.

I always thought the adult Framboise had forgiven the child she was for the child's actions and lack of understanding. That seemed remarkably deft to me, and it made Framboise much easier to take.

The big fish, though, was a bit annoying.

The Fetchings are, indeed, fetching - such a pretty pattern. One of these days... I've mean to read Five Quarters because the scrapbook discovery intrigues me. If no one else wants it, I'd be happy to have it, read it, and pass it on --

I bought & read "Five Quarters To The Orange" a couple of years ago. It's an unusual book, but I liked it. Sometimes it's fun to read something very different. I was drawn to it also because I love the movie "Chocolat".
The hat looks great and I love the birthday mitts! It's nice to be able to give our friends and family handmade items.

Bridget- Framboise sounds better than raspberry- but still, being named after a fruit?

Hey, Bridget, if you'd like to participate in the 10 favorite things... meme that I did on Friday, I'm assigning you the letter "L." Happy Monday to you!

Hmm, the book sounds interesting but nothing to run out and pick up. One of these days though.

Sweet of Sebastian! Good kid. Isn't Fetching fabulous? I've made it out of so many different yarns and everyone loves theirs.

I saw FO and read it as TO and wondered if you knew that he has a "fitness" book out then realized I read the title wrong and no, you really wouldn't care, so I called it a wash and decided just to comment for the hell of it.

Catching up on my blog reading. Love your new FO hat and Fetchings. Very pretty Fetchings.

Too bad about the Big A&* TV. I need to buy a new TV myself but I didn't take yours off your curb :)

I live on a gravel road that ends at a busy 2 lane highway. Once someone left a big sectional couch set up around a TV on a stand at the end of the gravel road. It only took 36 hours for it all to disappear.

Enjoy your blog very much

I enjoy Joann Harris's books, and liked "Five Quarters of the Orange" very much. Though the characters where hard to really love, the unfolding of the story was interesting and paced very well to make you want to keep reading, I felt. Mostly I loved all the talk of food in it--LOL! ;o) Love those strawberry-colored mitts...they are lovely--excellent work! Happy Days ((HUGS))

I am curious about this book. Maybe I'll check it out... after I finish Chocolat!