From Abe to Zach

Happy 200th Birthday Abe!
This image is one of my favorites of Abraham Lincoln, shown here with his son Tad. I have always been a fan of Lincoln's (even though I have no idea how he feels about me ...), and the whole thing really solidified when I read a biography about him while I was in elementary school. For me, the fact that he was not "perfect" was always what made him seem like an approachable historic figure.
(When I was a teenager, I also remember seeing Martin Mull on some TV talk show, where the host asked him what he had been doing since his work on the show "Mary Hartman, Mary Hartman" had ended. He responded (completely straightfaced), "I've been finishing the book I'm writing, which is called: Lincoln - the Car, the Man, and the Tunnel." For a few seconds, you could see a look on the host's face that meant he thought it was a serious response. Which of course to me made me think it was even funnier - and I like to think that Lincoln would be amused, too.)
And now for something completely different ...
My great-nephew Zach turned 3 this past Sunday, and, as The Tim had to work, we were not able to go to his birthday party. I had decided that I wanted to knit a hat for him for his birthday, and as you may recall, the Penguin Pal Hat was too small. I got another type of hat in my mind's eye, and after that, nothing else would do. I poked around, and couldn't find anything that was exactly what I had in mind, and also free. So I decided that I would try making up a pattern on my own.
I pulled out my copy of Ann Budd's The Knitter's Book of Handy Patterns, and used the information there to get an idea of sizing, based on the yarn I wanted to use. Then I wrote up some basic instructions for myself, and just started knitting.
Guess what? It worked! I ended up with just the shape that I wanted, but I also wanted it to have tassels. I found instructions for tassels in a couple of other books, but they kept turning out looking like pom-poms on crack. So I decided I would just wing it and see if I could get it to work my own way. Guess what? That worked too!
And as a result, I give you the Zach Attack Hat: 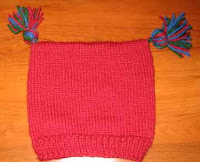 Now I know that for a lot of you, this is no big deal, being a very basic item. But this is the first time I have ever tried knitting anything without any specific written pattern; and then to have it look just the way I I had pictured it - well, I was really excited. I popped it in the mail, and my niece La Liz reports that a) it fits, b) he loves it, and c) she is sending me a picture of him wearing it (which of course you can expect to see here at some point)!

In the meantime, you'll have to settle for a shot of Barnsie, the Barnes and Noble Bear, modeling it.** 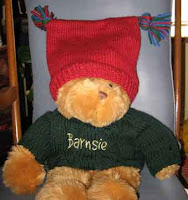 **As you can see, it's too big for him, but Barnsie is nothing if not a good sport.
Posted by Bridget at 7:25 PM

Bridget~
The Zach Attack Hat looks GREAT and I, for one, am very proud of your accomplishment. YOUR tassels don't look a bit like crack heads either. Good Job!!:)
I also am a fan of good ole Abe. We live just about 1 1/2 from Springfield, Illinois and went last summer to see the beautiful Lincoln museum there. It's awesome. If your ever in the area look me up & we'll see it together!

Although there seems to be a trace of discomfiture on Barnesie's face.

Bridget- Congratulations- you're a designer!

Remember Martin Mull on Fernwood Tonight- I had a record of his, and he did a song "I married a midget"-
I loved him.

(and have no idea how he felt about me)

Bridget -- I am enjoying your blog. You were kind enough to comment on my very first blog post and I wanted to return the favor. The hat is adorable and I would wear one like it (if it weren't blazing hot down here most of the year). I enjoy your comments on my blog. Don't you think comments are half the fun? Take care.

It's me again. I just recognized your profile photo! That's Nora Charles with Asta, isn't it? Love those movies.

Nice! The hat looks good and you did it ALL by yourself! And it fits.

Lincoln: The Car, The Man, The Tunnel. Why do I so desperately want to read that book? lol.

I found your blog through handknitsthatblossom -- saw the picture of Honest Abe in Danette's side margin and had to click. I live in Illinois, in the same area Lincoln used to ride the old law circuit. We're quite fond of him here. He is one of my role models. Happy birthday (a day late) to President Lincoln!
Your Zach Attack hat is precious, by the way!

That is a most righteous hat! Congrats to Zach Attack! Go birthday boy, go!

Happy Valentine's Day to you too. And happy birthday to the Garden Kitty and Jetsam.

The Zack Attack is great!