Look - a picture of the Garden Kitty without glowing eyes!  Every year, GK has to spend some time sitting next to Rudolph under the tree.  I think he likes this Rudolph because he is totally non-threatening, in that he doesn't move or make noise.  And we all know that GK is nothing if not careful about such things ...

Our Christmas preparations are coming along nicely.  The tree is up and decorated, we've done some of our baking, and all of the packages that had to be mailed are on their way.  I still have a small bit of Christmas knitting to do, but I feel certain that it will be finished in plenty of time.

However, there is one project that I really expected to finish, that is only slightly more than halfway complete right now.  Remember this? 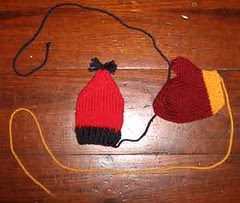 It's the beginning of the Adventskalender, started early in January.  My plan was to knit one or two mittens/hats a month, so I would have it to use this year.  Which was totally doable, I just didn't do it.  After making one hat and one mitten, I decided that since the mittens were slightly more involved, I'd make them first.  I got stuck during the summer, when I had a few weeks where I was too hot and/or depressed to knit at all, period.  I kept working on them, but not as regularly.  So as of today, I have 12 mittens and one hat.  Not bad, and since Christmas comes every year, I figure it's not a big problem that I won't have them for this year.  They are fun to knit, and now that I'll be doing the hats, there's a good chance I may even finish by the time Christmastime is over this year.  Then I'll have a whole year to put the numbers on them ... which I'll probably do, oh around next November 30!

On to a lazy evening.  Hope you have a chance to relax as well.

The earth has grown old with its burden of care,

But at Christmas it always is young.

Bridget- You're right. Just because something is do-able, doesn't mean we're going to do it.

Garden Kitty is adorable. I hope he has a nice personality. A very merry Christmas to you and yours, even the kitties.

Love that photo of Garden Kitty and Rudolph. Maybe 2010 will be a better "knitting for Christmas year 'round" year?

Garden Kitty looks so handsome - just like his real self.