I cannot believe how many people read my blog!  I have "known" some of you for a while, but when I was reading the comments for my last post, I kept thinking, WOW this is a lot of people!  Thank you so very much, it was really exciting to meet some of you, and to touch base with old friends.  :-)

On the one hand, getting so many comments was great ... on the other hand, it meant that I had to draw names for the blogiversary giveaway, and couldn't send something to each person.  So for those of you whose names weren't picked, I apologize.  But I'm absolutely thrilled that you are here!  I hope you'll stick around, whether you comment or not.  I'm the same way, I read lots of blogs, and don't necessarily always comment, especially when - as someone mentioned - it's just to say, "Yes," or something similar.

I've sent e-mails to the winners, asking for their addresses.

I also deleted three particular comments who were from people accusing me of most likely wanting to get rid of "moth-eaten" yarn.  None of the yarn I am sending has any indications at all of moths, and I promise that I am sending it to you in good faith that it is moth-free.  If by some chance it is not, you have my sincere apologies in advance.  Another person said that I should tell people what the books were in case they were things people already had.  And I guess I could have done that, but you know what?  I'm sending the stuff as a surprise, and if you don't want it or already have it, you are more than welcome to pass it along.  I am only including this here to acknowledge those people, and to say that I was doing this for fun.  Geez!

I have to say that as it turned out, it was an excellent week to be doing the giveaway, as it was a particularly horrible week at work, and having your comments and being able to think about what to send to each of you cheered me up each and every day.

That's it for now.  I'm leaving you with this photo from our walk yesterday at the John Heinz National Wildlife Refuge.  It's about 20 minutes from our house, and yesterday morning the weather was absolutely perfect for being out on the trails.  While you are walking around there, it's almost impossible to believe that across the interstate is the Philadelphia International Airport. 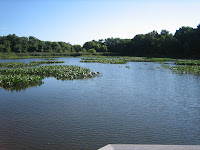 Hooray, Bridget, I am so excited. Thank you for picking my name. You made my day.
Hugs,
Meredith

Great shot! And I hope that the week ahead is a much better one at work.

Well I am totally bummed that I am late in reading abt the giveaways! Either way, congrats on your 7 year blogiversary!!!! And BLAH to those naysayers! Don't understand when ppl forgot the lesson of if you cant say anything nice......Don't want the yarn or books? Fine, don't enter to win! Easy peasy if you ask me.

Here's to many more years of blogging! Congrats again.

Bridget, I think I goofed. I checked my email before I checked this blog and I marked what was probably your request for address as spam (I didn't recognize the name).
Would you mind sending it to me via ravelry? I'm bassetlover. I will also send a PM to you from my box there.
I'm sorry...
Phyllis
8(

Phyllis - don't feel bad! I realized after I sent e-mails to everyone that the subject line did sound spammy. (But I was too lazy to re-do it ...)

Anyhoo, I've contacted you on Ravelry, thanks for your info there. :-)

I was excited to get your email because I had a kind of stressful weekend with a pacemaker implanted on Friday and home from the hospital on Saturday. Your email was a ray of sunshine. Thank you!

Why on Earth would someone think you are sending out moth-ridden yarn? :/

I hope you have a better week, and remember to dive in all your riches like Scrooge McDuck. ;)

I'm rather excited about the surprise. As for the ... rude comments, evidently it's true and no good deed goes unpunished, and there are dolts who do indeed look a gift horse in the mouth.

Wishing you a better week ahead. Mine is ridiculously busy, so someone, somewhere should have a nice one.

People are really too much sometimes.

I love going to the park-that looks lovely.

Moth eaten? Are they kidding? Some people do not deserve to be in a drawing. They would suck the fun out of a .....carnival. As my Dad would NOT have said. :)