FO and a New [To Me] Stitch

I think I mentioned in a previous post that my knitting output this year was underwhelming.  Not that I haven't thought about a lot, I just didn't knit as many things as usual.

However, a week and one day before his birthday, The Tim said casually, "I hope you are thinking of knitting me a hat for my birthday, I could use another knit hat." Let's ignore the fact that he waited to mention this until his birthday was nearly here, and know that I was kind of excited to hear that, since I'd just seen a newly-released hat pattern I'd wanted to try.  I wasn't really convinced that I'd have it ready for his birthday, but I could at least get started.

Another thing in my favor was that I had stash yarn I could use, so I was able to cast on right away.  I got started, and was going along merrily, until my osteoarthritis flared up.  Sigh.  So I had to put things down for about three days.  Meaning that it was even less likely to be ready for the intended day.  But at this point, I wasn't going to worry about it, because it could always become a Christmas gift.

The most surprising thing is, on the weekend before the actual birthday date, I ended up getting quite a lot of it knitted - so much so that I was able to finish it the morning of the day in question! 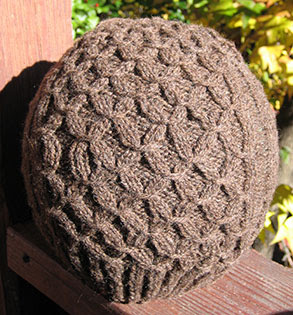 Project:  Welsh Gathers
Pattern:  Gather, by Alexa Ludeman, at Tin Can Knits
Needles:  Size US4, US6
Yarn:  Garthenor Organic Pure Wool Organic Shetland DK (received in a swap)
Modifications:  None
Comments:  This was fun to knit, as I had never done smocking stitch before, and enjoyed learning something new.  I like the look of it, and this yarn really showed it off well.  The yarn itself was really nice to work with, and made a lightweight but cozy hat.

I called this "Welsh Gathers" since the yarn was Welsh and the pattern is called "Gather."  I made the Large size, but if I made this again, I would consider making it shorter than the pattern indicates, as it turned out to be a very long hat.  The Tim was thrilled, and just turned up the brim/ribbing, so he was happy with some extra warmth on his ears.  The pattern is very well written, and though the smocking doesn't go all the way around (as I thought it did),* the end result is really attactive.

So for something that had a questionable and shaky start, it all turned out in the end.  I don't know which one of us was more surprised!

*I'm sure I could have figured out how to get it to work so that the smocking was all around, but had neither the time or the strong desire to do so ...
Posted by Bridget at 3:13 PM
Labels: 2013-knitting, birthdays, fos, gifts, hats, The-Tim

What is it with males? Briton invariably says, about 4 days before Christmas, that he's like another hand-knit sweater.

Fantastic knit up!!! OMG I love it!! What a great hat

Great-looking hat. The yarn is perfect to see the stitch. Nice job!

Nice hat! Love the stitch and the yarn. Love them together. And you've almost convinced me of the joys of December.