A few months ago, I signed up for a Christmas-themed swap on Ravelry.  I enjoy swaps, probably because I love getting stuff in the mail, and also because I've been fortunate to have never been burned, participating in one.**

One of the rules is that you must knit something for your swap partner, and there was a questionnaire to give you info, hints on favorite colors, etc.  My swap partner said that her favorite color was purple, that she liked bulky knits, and texture.  I decided to knit a hat.  Of course, then every single pattern I looked at called for two skeins of bulky yarn, but seemed to only use a small bit of the second skein.  I couldn't really afford two skeins, so I decided to try my hand at knitting a hat using one skein, and got started.

At first, I was just going to do a knit three rows/purl three rows pattern, but as I started, I decided to change it a little.  After a little more than a week, I had a completed hat, that I thought looked very acceptable. 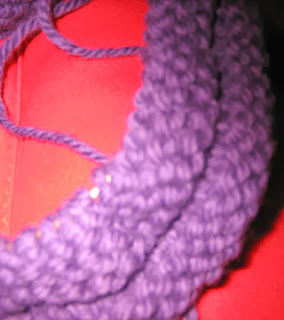 In the beginning, it was just The Purple Blob, but it turned out to be the 3-5-7 Hat: 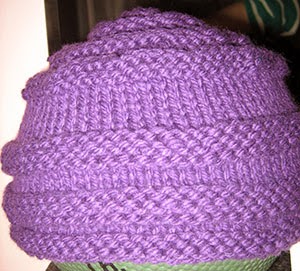 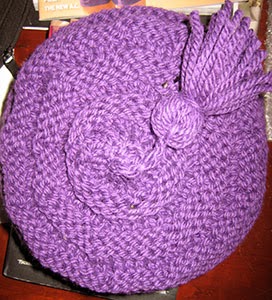 Add a jaunty tassel on the top, and voila!

I think it turned out pretty well, though it doesn't completely cover the wearer's ears (well, it doesn't cover my ears anyway).  But it is purple, it is bulky, and the knit/purl combs give it texture.  That's what she asked for, if you recall.

Project:  3-5-7 Hat aka The Purple Blob
Source:  My brain
Yarn:  O-Wool Legacy Bulky; colorway, Cabbage
Needles:  US9
Comments:  As I mentioned, it probably could have been a little bit longer, but I didn't want to run out of yarn.  The Legacy Bulky is a nice yarn, and the pattern I made up was easy enough to do while watching TV and still required attention to remember when to go from knits to purls.  I think I may try a version - maybe in another weight yarn - and keep notes while I knit, so that I can share the information with anyone who is interested (and now I'm sure you'll all be waiting with bated breath, right???).  I am pleased that I was able to translate something from my brain to the needles, which is something that I wouldn't have had a clue how to do even as recently as a few years ago.

Now I need only to mail the package, and hope she likes it.  But even if she doesn't for some reason, I tried, right?

**There was the time I participated in a swap, where one of the things we were supposed to send was some tea.  My partner was in England, so imagine my surprise/dismay when I opened up the package and there was a box of LIPTON tea!
Posted by Bridget at 7:03 PM
Labels: Christmastime, gifts, hats, knitted-gifts, my-design

Very pretty. Congrats on realizing your own pattern ....that will make the hat even MORE special.

Sorry I didn't make it down to Rosie's on Sunday. I really did NOT want to drive the Schuylkill on an Eagles game day!

I'll let you know when we get up to Phila. again.

Bridget- She'll love it. It's great.

Nice-looking hat: your swap partner should love it.

I've had good luck with swaps (only stiffed once) and met some great people.

That tassel is jaunty indeed! I love the color of that yarn, and the bulky weight makes it look so cozy!

Awww your swap partner will LOVE That hat. It came out amazing

Your swap partner is going to be thrilled, that is a lovely hat, perfect color and shape.
Hugs,
Meredith

She is going to love this hat, it is a perfect color and a perfect style.
Hugs,
Meredith

Now that is a very nice hat and I'm sure your swap partner will love it! Swaps are funny things aren't they? I haven't done one in years but when I did do them I found them enjoyable.

cute hat! I like the tassle on top and the color is pretty :)

I think the hat turned out well. I like swaps, too. I don't often participate in them because it takes some financial planning for me, but I do love them, and I've received some wonderful things.