The other day while I was at Rosie's, I asked Lisa (the owner) how long the shop had been around, and she said eighteen years.  I remember discovering it one day on a walk, and being excited because maybe I could learn to knit!  I signed up for their second round of Learn to Knit classes, and the day after the last class, I pulled a skein of yarn from the sale bin and bought it.  I liked it so much, and just knew it would have to become something special.

Each time I would revisit my stash, I would come across the skein of yarn.  It was never considered for giveaways, or for donation to charity, but I also could never think of anything specific to make using it.  For one thing, it was only one skein, and it was bulky yarn, which meant that there wasn't much yardage.  I don't have a lot of yarn in that weight, so there were no immediate pairings that came to mind for it, either.

Enter 2014, and the Polar Vortex.  Snow, cold, wind chills, much more than we have had in years.  I was so happy that I'd  made my Seedy Cowl (seen and described in this post), I thought I should look for some stash yarn to make a hat for myself.  I came across the aforementioned skein again, and thought, "Hmm, that would be a nice hat, and probably a quick knit."  So I poked around on Ravelry, and found that someone had used it to knit The Amanda Hat, which had been in my queue for a long time.  So, I cast on, and very quickly, I had a new hat - just in time for another round of Polar Vortex weather, snow, and wind chill! 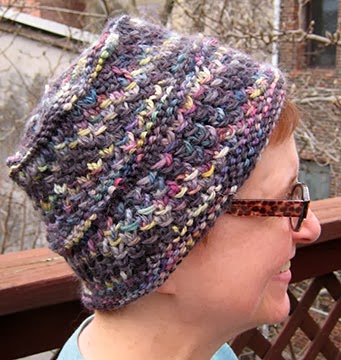 As it turned out, I didn't get a chance to block it, because I needed it almost right away - but no matter, I made it to wear, right?  I can tell you that it is amazingly, cozily, warm.

Project:  But It's My Hat Instead
Pattern:  The Amanda Hat
Yarn:  Colinette Skye, in the Bright Charcoal colorway
Needles:  US 9
Modifications:  None
Comments:  This was an interesting pattern, requiring some attention, but with a quickly-learned repeat, and still a pretty fast knit.  The yarn is lovely to knit with, and I didn't find it splitty or rough or anything annoying.  I got to the point where I needed to do the last few rounds on double-pointed needles, and didn't have any in the size needed - grrr!  So I waited five extra days to get to Rosie's and borrow a set to finish it there.  (I was broke and couldn't afford them at the time.)  Anyway, the resulting hat is comfortable, pretty, and doesn't even really give me hat hair (at least not as much as other hats do)!

I can recommend this pattern, and this yarn, though by now it may be discontinued. I mean, I did buy it eighteen years ago ... 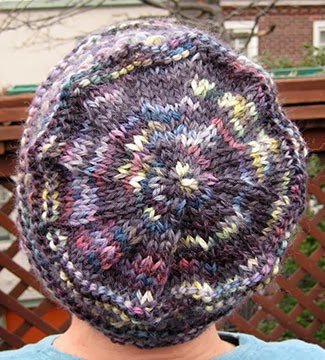 I love the way it looks on the top!

Bridget- I remember Collinette, one of the first hand dyers.

It's a great hat.

What a great story -- and a great hat! Stay warm!

I love the hat and its history!

I love that you had the yarn for so long and it waited patiently for you to come up with the perfect pattern. You look adorable wearing it.
Hugs,
Meredith

I like your hat! Sometimes you have to hang onto something special until destiny tells you what to do with it.

It is so so pretty . Funny I wrote about finishing a cowl in bunny fur after many many years ….just today.