Well, this isn't too bad - I'm finishing up with 2013 right near the middle of January 2014 - sooner than I have finished my thank-you notes for Christmas gifts! There wasn't a lot of knitting this past year, and to be honest, I'm not exactly sure why.  I was happy with what I made, I just didn't make too many things!

The final knits of the year were four birthday gifts, and one thing for myself.  I think I mentioned here that I had decided to knit gifts for four of my nieces' birthdays, after seeing a cowl that was knit in a class at Rosie's.  I asked each of them for their favorite colors, and bought the yarn, and was finished in plenty of time for gifting!  (I send the BD gifts with the Christmas gifts, as all four birthdays are around that time as well.)  Here they are, all together, mainly because the photo of them together is so much prettier and more interesting than the photo of each one individually! 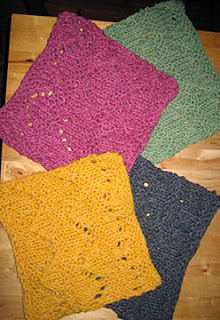 Projects:  Favorite Color Birthday Cowls
Pattern:  Drydock Cowl, by Jocelyn Tunney (a free pattern)
Yarn:  O-Wool  Balance Bulky - Boltwoodite (yellow); Rhodonite (pink); Peridot (green); Graphite (gray), nearly one skein for each cowl was needed
Needles:  US13
Modifications:  None
Comments:  This is an easy, interesting knit and the resulting cowl is really lovely.  Balance Bulky is not an expensive yarn, so I was able to make these without breaking the bank.  The pattern is well written, and you can easily complete a cowl during an evening or weekend afternoon.  I recommend it for gifts, especially.

After these were finished and sent off to their respective recipients, I realized that I had no more gift knitting to do!  I have a couple of projects underway, but neither were calling to me over the holiday break.

Last year, I received a gift certificate to Loop for Christmas from a friend, and I had purchased yarn with a specific design in mind. Unfortunately, the yarn and my idea were not destined to be friends, and since I had wound the yarn, it was not able to be returned.  So all year, I kept looking at it, thinking I'd use it for something, sometime.  With the weather turning colder, I thought about something else, and decided to give it a try.  The result?  The Seedy Cowl! 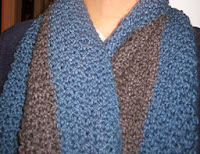 Not only was this the last project I finished in 2013, I did the bind off and weaving in of the ends at 11:20 p.m. on December 31!  It is incredibly soft, and cozy, and was absolutely perfect for the subzero temperatures that hit the next week.  It was completely unplanned, and once I got started, didn't require much thought or attention, and I truly love the result. (More pics on the Ravelry project page.)

Project:  The Seedy Cowl
Pattern:  From my brain
Yarn:  Fibre Company Tundra - Scotia Sea (blue, 2 skeins); Petrel (gray, 1 skein)
Needles:  US10
Comments:  I cast on 150 stitches, joined into a circle, and just knit double moss stitch.  When I ran out of the first skein of blue, I attached the gray, and when that was done, went to the other skein of blue.  By the time I cast off, I had maybe 4 feet of yarn left altogether - bits and pieces from each skein that were not enough to complete a round.  This is quite possibly the cushiest thing I have ever knit or worn, and it can actually be worn as a hood/scarf combination if desired.

And there you have it, the final projects of the year, which brought my grand total for the year to ten knits.  I'll take it! 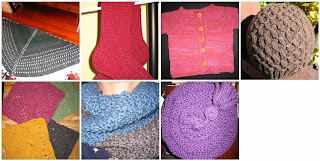 The gift cowls are darling and so colorful.

If you don't ming, I might knit a Seedy Cowl of my own in the next month or so. Thanks for the knit notes.

Bridget- I admit, I didn't see the sense of cowls, but now I do. No having to tie it up or get caught in the car door.

All in all, I think ya done good!

Those cowls are really sweet!!!!! You had a fine knit year

It's always to fun to look back and review the year-just-finished. Looks like you had a great year on the needles!

I bet your nieces were thrilled. Love the cowls.
hugs,
Meredith

Those gift cowls are inspired! I'm glad to know, I'm not the only one where my purchased yarn and the intended pattern don't work out the way I had hoped. Good job re purposing the yarn!