Every once in a while, I find that, without realizing it, I suddenly have more than just 1 or 2 WIPs (works-in-progress) on the knitting needles.  Occasionally, it's a situation where all that is needed is a toe on a sock, or a mistake to fix before binding off - you know, small and easily resolved things.

But this is not the case with any of these: 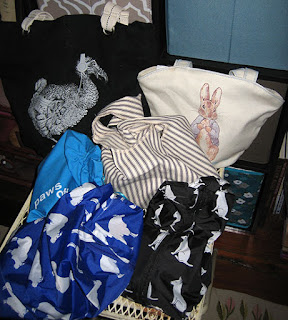 I cannot remember *ever* having six things going and none of them near being finished, ever, since I started knitting!

Let's review, shall we? 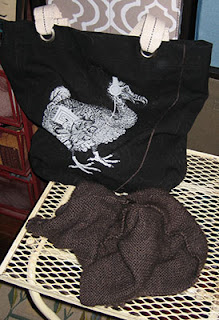 This one I am well aware is a long-term WIP.  It's straight garter stitch, and I bring it out when I am in the mood to knit, but not worry about looking at a pattern.  (I must admit that this does not mean I don't still screw it up and have to frog back a few rows ...) 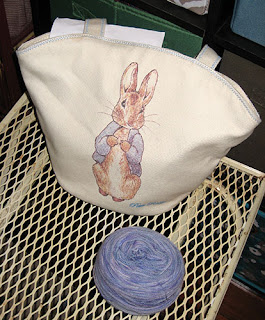 If you click on the link, you see the start of something.  I love this yarn, I love the pattern, and I was loving the way it looked.  Then The Koodle found it.  So now I have my ball of yarn, and will start over.  This one takes more concentration at the beginning, so I don't want to restart until I have a block of time to focus. 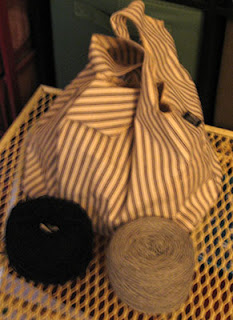 I did have three colors for these socks, and was going to make them as a Christmas gift for 2014 for The Tim.  But first of all, the needles I was using were too slippery for the chosen yarns, and the original third color did not provide enough contrast against the gray, which I will be using for the main color.  So I put these wound skeins away until I was ready to figure out what other color I wanted to use, and the knitting bag was folded and put away as well.  I guess this one is technically no longer a WIP ... 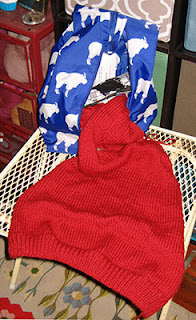 I started this at the end of October 2014, in a class at Loop.  I do want to finish it, I do like the yarn, and the customized pattern.  I just don't work on it that often, and I think it's because I am afraid that even though it's designed to my measurements, I made a swatch, etc., that it won't fit when it is finished.  I need to get over it, so that I have it next fall when the weather gets cool enough to wear it! 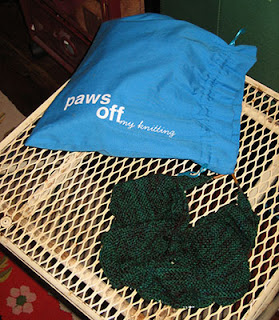 I was zipping along on this, and then two things stopped me:  1) I got to the part where you start to knit the edging, and got completely messed up!  I had to tink back six rows of 200+ stitches, and so this project is, er, "resting" for a while.  2) I had to get a longer needle, which has been purchased, so once the "rest" is over, I should be ready to get moving again.  But this one will take some concentration, so it's not to be picked up just anytime ... 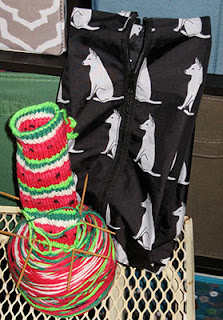 These are fun, and I am loving knitting them, but the past couple of weeks I have just not knit a single stitch, so they are waiting for me to move along on them.  I'm starting to get itchy to start knitting again, so they will likely be picked up and be the first thing in this group to be finished in the next few weeks, unless I hit a slump again.

I have been having problems with my right elbow, and knitting bothers it, so between that and some stressful things, I've only looked at the group of knitting bags with waiting projects, rather than actually working on them.

And of course, like so many other knitters with many projects underway, I really wish I could start something new!   But I have told myself that nothing else can be started until at least one of these is finished.  I don't want things to get any crazier or out of hand than they currently are for me.

As long as I don't come home some day and find a group of people gathered for an intervention, I think I'll be fine ... ;-)
Posted by Bridget at 7:37 PM
Labels: knitting, wips

Bridget- Does that bag have a picture of s Dodo bird with headphones?

I have projects in progress that I only work on during certain times of the year, like my 3 year old orange cabled sweater that is fall only knitting. I know, that's just crazy. I better be looking for that group of interventionists too!

Lorraine - that is a dodo bird with a Walkman! The bag is called "Extinct" and it is one of my favorite things. :-)

(Did anyone notice I seem to love knitting bags a little bit too much, too??)

I have way more than 6 WIPs, so you should feel virtuous. It is a really bad habit. I know that I should dedicate a year to UFOs, but I can't stop casting on!

I love your WIP awareness moment, ha! I have 2 pairs of socks in progress from last year that just haven't felt "right" yet to finish. I have more in progress than I'd like to admit, but I'm enjoying my knit.

I hope your body gives you a break and lets you get back to it. Though it's definitely better to not aggravate any discomfort you have.

Oh and I love the watermelon socks. I whined about how wonderful they are to my friend and she got me some similar yarn for my birthday! Love the good influence :)

Start some new things so we can see more of your great bags! (I have that exact Fringe one, btw.)

You are so multi talented! I love everything!

Hope your elbow feels better soon so you can get KNITTIN'!