We are almost finished with February, with today being the usual last day of the month, but this year we have Leap Day, so there's still one left! (I wish Leap Day would be on the weekend ... it would be more special.  Instead, it's just a work day. Oh well.)

Anyway, being that I can kinda/sorta post new pictures now, and that there are some new items to show you for Harry's Hundred, I decided to go ahead and update you today.

I have to tell you, some of those Ravelry knitters are amazing in their production levels!  I'm not complaining, just impressed.  :-)

One person, knitgiver, has made 12 hats already for the project!  She was also knitting hats for another group, so they are all in this photo together, along with those so far for the other group.

And you may remember GringaTurista from the last update, where she had knit a pair of mittens - well, here is the coordinating hat. 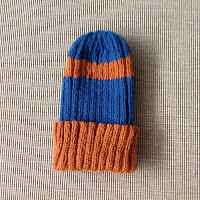 She told me she is "just getting started" - wow!

As for people I know in real life (yay, I get to say that!), Kim has made these two hats, after having already made a scarf that was in last month's update.

Oh wow, red AND stripes - two of my faves!

And believe it or not, I actually have something completed, and something else underway (I know, amazing but slow).  First up, the completed hat, which I thought was a nice bright color for the cold days or nights. 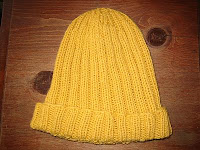 My other current knit for this project is a Seafarer's Scarf.  I've made a couple of these in the past for The Tim, and he loves them, as well as having made them for gifts, and they were a big hit.  Everyone loves the way they stay around your neck, keeping you warm.  I have a little more done than is in this photo, but the pattern is one that is quick to complete, since it is not at all complicated.

I have to say that I'm feeling pretty encouraged at this point, and I am more than grateful to everyone who is taking the time to participate.

Not too bad for only the second month of the year, huh?  Onward and upward!
Posted by Bridget at 9:25 AM
Labels: Harry's-Hundred

All of those hats look snuggly warm! Harry would be so proud.

Thanks for including the pattern. I've always wanted to knit one. I love the idea of less bulk around the neck. !!

It's wonderful to see all the finished projects!

A great project! And a happy leap day.
Amalia
xo

Bridget it's fantastic. Thank you for sharing the progress. It was inspirational and I hope to put something a little later, just something towards your goal as well. All the best.