This week, Kathy's meme is a BIG one.  She in fact claims that it is the Biggest Monday Meme of 2016.  So there you go.  Though maybe she said that just so that she didn't have to think of any bigger ones for this year ...

1. What is the bulkiest yarn with which you have knitted or crocheted?
I think it must be The Fabulous Elf hat knitted for my great-nephew Zach a few years ago.  The yarn was Katia Fabula.

2. What is the biggest size needle you've worked?
Size 15US, for the aforementioned hat.

3. Tell me about the WHOLE enchilada!
I love cheese enchiladas, and though I think it's great when they have rice and/or beans, I'm really happy if guacamole is involved.

5. Name something oversized that you own and love. 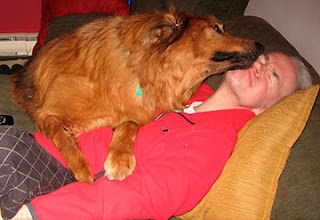 Dug - he thinks he is a lap dog ... (though I think of him as family rather than a possession)

6. Which is bigger, the number of projects on your Ravelry project pages or the patterns you have faved?
It's close - I have 102 projects listed, and 121 favorites.

7. What is the biggest vegetable you have grown?
Zucchini.  I've never lived anywhere that had a lot of room for big vegetables.

8. How large is your stash?
a) reasonable, I have some new skeins and lots of leftovers
b) Not fair, I just came from the Sheep and Wool Festival
c) Let's just say we may have a knitting problem.
Really, not *quite* any of these.  I have a larger stash than I need, but it pales compared to most stashes I have seen and/or heard described.  I would say it's somewhere in between a and c, since I didn't buy any yarn at Maryland Sheep and Wool this year.

9. What's the longest vacation you have ever taken?
Ten days, when we went to Ireland.

10. What is the longest you have gone without talking to another human being?
I think four days.  In a previous life, The Tim used to go on a lot of business trips, and I would enjoy being on my own.  Though I did talk to the cats all of the time (we didn't have Dug then), which I do anyway.  And I pretty much constantly talk to myself ...

I think since I have to talk so much at work, I enjoy not talking to other people when I don't have to!
Posted by Bridget at 9:17 PM
Labels: Monday-Memes

I talk to Giroux a LOT. So, I guess I'm never really alone in the house anymore. LOL

Yes, I'm always talking to myself and Tyg, our cat. I can't believe you did not buy ANY yarn at MDSW!!

Talking to oneself is highly under-rated. That's usually when I get the best answers! :)

FUn to read your answers Bridget. You are the closest person with favorites and actua projects on Ravelry