Hello and Happy Saturday!  I hope you are enjoying your weekend.  I'm taking a little break at the moment, and thought I'd go ahead and write a post.  This morning I did some running around, attempting to get a few things accomplished since we will be away next weekend.  I was slightly successful, but didn't do as much as I'd like since it started raining.  Not pouring, but just enough to make being outside, even with an umbrella, slightly unpleasant.

Anyway, as the title of the post says, knitting does still happen here.  I keep looking at others' blogs, and they seem to get so much more knitting finished than I do.  It doesn't bother me really, since I knit for fun, not as a contest, but I tend to take a while to actually complete a project.  But I have one to show you today, and not only is it an FO, but it is a Christmas gift, so I consider that a two-fer!

I think I've mentioned that I had a plan to make each of my niece's husbands a Turn A Square hat for Christmas.  It's a pattern that I have made a few times, for The Tim, and he loves the resulting hats.  He's also had a lot of compliments on them.

So here is the first of three, for my nephew-in-law (?) Patrick.  He is an attorney, so I was thinking something a bit classic, color-wise.  Here's the finished hat from the side: 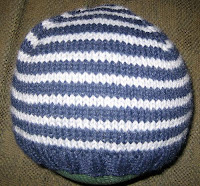 and from the top: 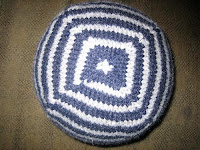 I'm very pleased with the result, and am also more than pleased to already have a holiday gift ready.  If you haven't tried this pattern, you should. It knits up quickly, and there are an infinite number of possibilities for color combinations and stripes.

Project:  Pat P's Turn a Square Hat
Pattern:  Turn a Square by Jared Flood/Brooklyn Tweed
Needles:  US 5 and 7
Yarn:  Berocco Vintage, Denim and Dove
Modifications:  Since I used a regular long-tail cast on, I didn't need the third needle size the pattern mentions. I did use the jogless stripe method, and otherwise, knit the pattern as written.

For the record, the colors are more navy blue and light charcoal gray - its darker in real life than in my washed-out photos.

I think rather than go ahead and start another one of these right now, I'll work on one of the things I want to make for my nieces.   That way - at least in theory - I won't get sick of either thing right away, since I'm making multiples.

And now I'm off to get a few things done around the house (exciting stuff like laundry!), and enjoy the rest of my weekend  I hope yours is good as well.
Posted by Bridget at 2:42 PM
Labels: 2016-knitting, family, fos, hats, knitted-gifts

The hat looks good and getting a jump on the Christmas giving is never a bad idea.

Today was mani-pedi day for Giroux. We got the mani done and I nipped a quick. He wasn't pleased. :-( The pedi will have to wait while he forgets the mani.

That is one handsome hat!

Those hats are going to be a huge hit. I am often baffled by all that gets done in other peoples lives. I knit to save myself and everyone else in my life so things do get done here but time is limited so not as much gets done as I would like.
Hugs to you,
MEredith

aw turn a square hat is awesome. It will be a much loved and worn gift!
Im off to a very slow start this morning. 9:45 and I'm still waking up with my coffee......

Haha! I think we have all been struggling to get the knitting in. I blame May whatever the heck that means. Anyhow, I love that pattern it's a favorite of mine, but yours looks perfect.