A Most Lovely Summertime Weekend

Before going any further into this week, I wanted to share some pictures from last weekend, which was one of those weekends in the summer when the weather and your activities work together to make it just slightly more special than the average weekend.

I may have mentioned here something I've been calling Operation Reclaim the Garden.  To provide brief background: we have a garden area on the side of our house, where at some point in time another row house existed.  It's truly lovely, walled-in and very private, and was one of the huge selling points for us for the house.  For various reasons - construction and/or street repairs on our block, surgery and recovery, etc. - over the past few years, it has only gotten the most minimal care, and had the look of returning to the wild (well, as wild as an inner city plot can get).  This year I have been determined to fix it up and return it to the lovely outside area where we could sit and enjoy being outside when the weather permitted.

The past couple of weekends, I've done quite a bit to clean it up, and though it is a small space, a lot needed to be done.  I finally have it to the point where it just needs some fine tuning and last touches to be "habitable" again, and last weekend I was able to make real progress.  I had some plants and flowers and was able to put them into pots so that the garden would actually look more like a garden!  I also fixed up some pots to put at one of the fronts of our house. *** 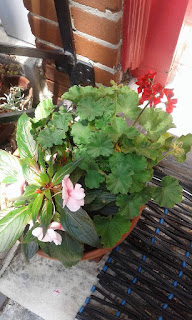 A geranium and an impatiens at  the side of the door 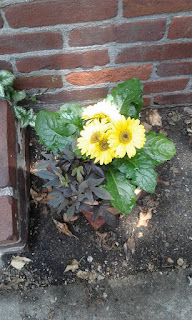 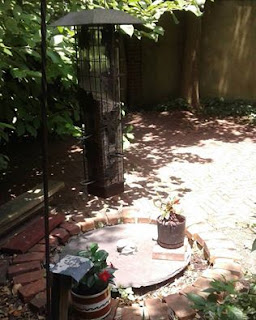 The garden, 90% cleaned up and ready with some flowers and the bird feeder.  The flower in the foreground is a mandevilla, and in the other pot are some pretty lavender flowers whose name currently escapes me, and another sweet potato vine.

I'm hoping that I can find some more flowers/plants to join these, but even if not, they look nice out there, and if we can find some garden chairs, etc. on sale this July 4th weekend, we'll be pretty well set.  And at a minimum, if we have to wait until next summer for that part, I won't be starting from scratch again as far as getting things ready!

So that was a pleasing endeavor, I have to tell you. :-)

Then on Saturday night, we went to the Mann Music Center here in Philadelphia for an outdoor concert.  We'd bought the tickets months ago, and had been waiting for it to actually happen. 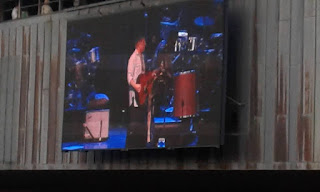 Paul Simon!  This is the large screen that was set up for the people with lawn seats (us), so that we could see better what was happening on the stage. 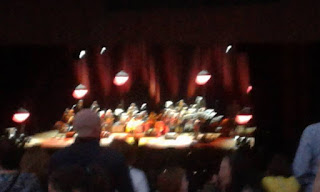 This is a (blurry) shot of the actual stage from our seats.  (I told The Tim that I felt bad that Paul Simon looked like such a little speck from where we were, but then realized that even close up, he's a small guy!)

It was one of the best concerts ever.  He and his band came out about 8:15 p.m., and played/sang without stopping until 10:45.  There were songs from his new album, as well as some of the oldies everyone loves.  The audience consisted of people of all ages, which was nice to see.  The weather cooperated, and was perfect - you know, the kind of night you hope for when you know you'll be outside.

I think one of my favorite parts was when they got to "You Can Call Me Al," and the audience was up dancing and singing the chorus.  It was so much fun when every person was enjoying the same thing and singing along!


***our house is two row houses joined back to back.  So we have two "main" entrances.  The entrance where the plants are is the one we use most often, since it's where the entry to the carport is as well.  We technically live at three addresses:  our mailing address on one street, and then our house and carport/garden/lot on the other street, where some of the utilities are registered.
Posted by Bridget at 7:15 AM
Labels: concerts, garden, summer

Wow! I would say that reclaiming your garden has been quite successful! It's really lovely and private, and will provide lots of relaxation and enjoyment. Great timing on Paul Simon since he just announced he's ready to retire!

what a fun fun fun weekend and concert!! I admire your reclaiming the garden photos :) We skipped having a veggie garden last year so this year we are kind of excited to have one!!

Bravo on the Garden Reclamation! It looks peaceful, tranquil, and inviting. And, I am just a wee bit envious of your evening with Paul Simon - what fun!

Your garden spot looks so inviting Bridget. Nice that it is so private too. And, Paul Simon at the Mann? That must have been so, so great. I wish we would go to concerts there, but it is a PITA using the Schuylkill Expressway (HATE that road!!).

Your garden improvements look great. Gerbera daisies are so cheerful!

Hope you'll find some furniture on sale this weekend so you can take your knitting and a cool drink outside and enjoy the hard work you put in.

Your description of your house address gave me a chuckle. You have to love Philadelphia and it's real estate craziness! Are you still considered living in Center City or does your neighborhood have another name.

Steve grew up in Fishtown, but most people don't know where that is so he usually says Kensington.

How fun to see Paul Simon!!! I bet it was a great concert.

And I'm loving your reclaimed garden. Definitely get a couple of chairs for the area. What a beautiful place to sit and relax!!!

I love Paul Simon. I've plunked away on my guitar to his music almost every day since I was a teen. The man is a genius. My guitar playing-not so much.
Your garden is quite a lovely little nook!

The garden is looking wonderful, Paul Simon is the best!
Hugs,
Meredith