Hello and Happy Friday!  I'm having a bit of a rough day, as I fell yesterday on my way home from work, and have some killer bruises to show for it.  On my elbows and knees, so of course where I actually need to bend ... but compared to The Big Fall, it's nothing.  But add to it that I have a dentist appt for later this morning for a filling, and ... well, I needed a way to make it a better day. :-)

So I thought maybe I would share some recipes with all of you now and then.  This first one is a true yum-fest!  Of course, if you are not a rhubarb fan, you won't think so - in that case, you should head over to someone else's blog!

Anyway, I love rhubarb.  And it isn't around for very long, so I thought I'd share this today.  Usually when we get rhubarb, I make stewed rhubarb, which both of us like, but I wanted to look for something different.  I have tried a rhubarb cake (recipe next time!) which was a winner, but just this past Sunday, I made these muffins, and they are D-E-L-I-C-I-O-U-S.  Unfortunately, I failed to note the source of this recipe; it's from a magazine, but I don't remember which  one, and for that I apologize.

Stir liquid ingredients into flour mixture, and fold in rhubarb.  Fill 12 lined muffin cups with mixture and bake for 18-22 minutes.  Cool in pan for 10 minutes, and then remove and allow to cool completely. 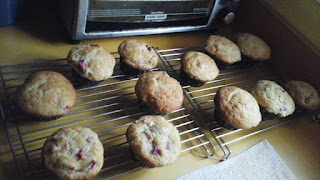 It's really pretty straightforward, and the results are worth it.  I can also tell you that 12 muffins for two people is a lot, so I froze some.  I had one yesterday, and it was just as yummy, so they freeze well.

Let me know if you try them, and what you think. And have a great weekend!
Posted by Bridget at 8:54 AM
Labels: baking, muffins, recipes

Oh, SO sorry about your fall! Please take care of yourself.

I've never been big on rhubarb. It's down to either its name or its appearance as to why. . .

Oh no I am so sorry about your fall, hope you are feeling better tomorrow.
Hugs,
Meredith

You had me at the word BUTTERY!

Hope the bruises heal up quickly!

Ouch. Falling is no fun. I have never had rhubarb before. Now you've made me curious. I'll have to see if I can find some.

Yikes, I hope you are on the mend soon! And, you are just too sweet - you injure yourself and you share a recipe with us! The recipe looks incredible! I will have to try it!

Rhubarb doesn't grow this far south, but we can get it in stores when it's in season wherever it does grow. My mother and grandparents (from South Dakota) told me about rhubarb, and when I saw some in a grocery store in Charleston, I bought it and made a rhubarb-strawberry deep dish pie. Yummy!

BTW, I like your blog's new look. Also, be careful! You don't want to break anything.

oh my goodness! I hope you are healing quickly and you'll be back to your old self. Falling as an adult is so ungraceful and quite painful :(

Sorry about your fall Bridget -- hope you are mending well and quickly. And a fall and then the dentist - yuck!

Thanks for the recipe. I love rhubarb - in fact we grow it in our garden and I've already chopped and frozen about 6-8 cups, baked some stuff and given some to my boss. The muffin recipe sounds wonderful.

Believe I was on vacation the same time as you...glad your stay-at -home version was good and hoping Dug is doing well. We did go to Vermont and Maine which was fabulous. Catching up at work is not so fabulous - lol.

My momma LOVED strawberry rhubarb anything. Its too sour for me, but Im glad you love it! We had a rhubarb plant in our yard when we moved here 33 years ago. It lasted a very long time; a decade at least and then it died

These look wonderful! I love rhubarb! I will have to try this recipe. Thanks Bridget!