It occurred to me the other day that I forgot to do an update for July for Harry's Hundred.  So I figured since we were already into August, I'd just wait and do a two-month update.  So that's not what this post is about.

Nope, this is a post for Harry's Hundredth - 100 years ago today, my dad was born in Wheeling, West Virginia.  He was the oldest of four children - two boys, two girls.  At the age of thirteen, when his father was killed by a train on the way home from work, the kids would be split up, and the two oldest (Harry and Mary Agnes) would live with one set of relatives, and the two youngest (Helen and John) with another.  Though of course he saw his younger siblings often, he was never as close to them as he might have been had the family been able to stay together.

Here he is at four months old.  This is one of my very favorite pictures, and is in a frame on display in our house. 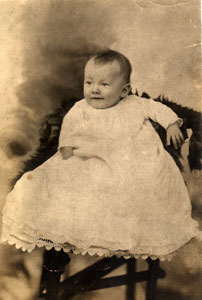 The funny thing is, he looks pretty much the same as a baby as I remember him as an adult!  I know that most people retain some of the look of their baby pictures, but this one is really uncanny.

He used to tell stories of playing football in high school, where he said it was not uncommon when one guy came off the field, he would take off his jersey, so that someone else going onto the field to play would have a jersey to wear - try to imagine that happening today in most places! 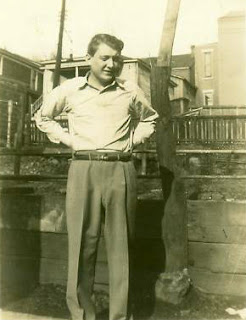 Just like many of his generation, the defining event of his young adulthood was World War II.  He joined the Army, and his main claim to fame was as the singer in the base's band.  He used to claim that women would swoon when he sang.  (My mother claimed otherwise.) 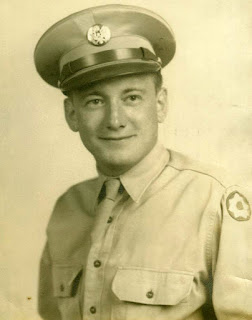 He and my mother were quite a couple.

With a flair for the ridiculous, which was passed on to their children. 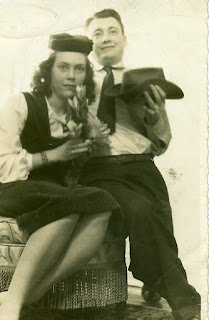 He was a real ham - loved to sing, dance (well ... ), perform, anything like that.  What would start as a card game at our house could easily turn into a sing-along. 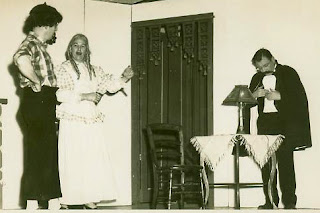 In this epic drama, he's on the far right.  I don't know what/when this is.  (Probably for the best.)

We were a fun family, who moved a lot, and as a result were very close.  I've posted this picture before, but this is the only family picture that exists, and it was taken long before I was born.  But it's one of my favorite pictures, because everyone is clearly so happy and healthy. 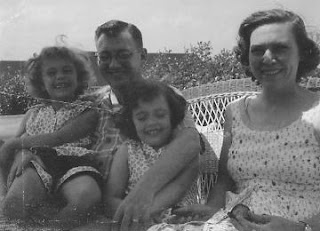 My dad died when I was 13 years old, from liver cancer, at a time when the treatment was nearly as deadly as the disease.  And yes, I remember that, and I remember seeing him then and not really recognizing him looking like my dad.  But 99.99999999% [repeating] of my memories are the fun ones and the good ones.

When I was little, he would end up babysitting me a lot while my mom and sisters went shopping or who knows what.  It was not uncommon for us to end up at his favorite bar if it was during the evening, so he could watch 'the fights' with his friends.  On weekend afternoons, we'd park ourselves in front of the TV and watch baseball games or football games, and share sandwiches and a beer (OK, I'd get a sip and have something else for my primary drink, but *I* still consider it having a beer!).  He loved to cook (and would use every single available pot or dish), and I was always "helping" him.  (I realize now that I probably spent the bulk of the time talking to him non-stop and God bless him for never telling me to shut the h*ll up!)  But I actually learned a lot about food and cooking from him.  He and my mother loved playing cards, going to the horse races (the whole family went along), and laughing.  He was a crazy goofy animal lover (sound like anyone you know?), and a real softie when it came to helping someone, human, furry, feathered, etc.

He took me to the circus every summer (this was when it was still OK to go to the circus).  It would be just the two of us, and it was the highlight for me of the summer - right before school started again.  A lot of our family vacations were trips to the Jersey Shore (northern end of things), and they were always an adventure, as he didn't think it was necessary to make reservations for a place to stay.  He was an early riser, even on vacation, and would get up around 6 a.m. and say, "Rise and shine girls, time to walk on the beach!"  (He knew better than to try and include my mother.)

He was a good guy.  He had plenty of faults, which I realized even as a kid, but he wanted all of us to do better and be better than he was.  He worked hard for his entire life, and I think - or would at least like to hope - that he got to do a lot of the things he enjoyed.

This is the last picture I have of him, taken from a program for a work-related organization event where he was the outgoing president.  I don't know specifically when this was taken, other than it was sometime in 1969.  He died in November of that year, and I'm guessing this was probably in the springtime.  But this is the Dad I remember.  And love. And think of and miss every single day.

So if you are inclined, please give your dad a kiss, a hug, or a phone call today, if you are lucky enough to still have him with you. And tonight if you have a drink, please raise a toast to my dad - he would approve!

Happy 100th Birthday, Dad - I wish you a day of sing-alongs, card games, and cocktails!  Give our love to everyone.
Posted by Bridget at 9:06 AM
Labels: 100-years, Harry's-Hundred, my-dad

What a beautiful tribute to you Dad. Happy birthday, Harry! Maybe you could look up my dad in heaven --- he plays a mean game of pinochle!

Cant wait for the Harry's hundred update! Great tribute .. He still influences you so that's sayingsomething!!!

what a lovely tribute.....and you remain one of his greatest legacies!!!

Lifting a Dr Pepper to him, thanking him for helping bring such a wonderful person into the world.

This is lovely and joyful. Your father must have been a terrific dad to have inspired such an honestly loving and simply proud tribute. And not just to him, but to the kind of family life he inspired and fostered. I'm glad you shared him.

What a lovely tribute to your father and his family. As a now parent-less child, perhaps to the other readers like me, a call to your sibling/s to share that family love!

What a wonderful post Bridget! Love that baby picture of Harry in a dress - ha-ha. Sounds like Harry was a remarkable guy. So great that you have such memories.

Hugs to you. I lost my mom to colon cancer when I was 13 so I can totally relate. What a lovely tribute to your dad.